The Wildrose Rodeo Association’s Spruce Point Park Rodeo on the Canada Day weekend was a big success. According to one of the chief organizers, it could hardly have turned out better.
“Fantastic,” was Mike Skrynyk’s term for it, speaking to The Leader last week on behalf of the Spruce Point Park and Marina Association. “Nothing but compliments.”
A key factor was putting on ‘sanctioned’ event, meaning that the provincial association noted above made it one their events – part of a circuit. July 1 is the traditional date for the Kinuso/Spruce Point rodeo, Skrynyk said, and there was little or no competition elsewhere in the province that weekend. Those factors had a lot to do with the turnout of competitors from all over Alberta.
Skrynyk says there was a strong focus on youth events, such as ‘mutton-busting’ (riding sheep, in other words) and ‘mini broncs.’
Well over 100 people registered for the events, which took place over two days. About 1,000 people came through the gate on the first day.
“It was a lot of fun,” says Skrynyk.
A lot of work too, no doubt, but worth it. As usual, sponsorship helped a lot. Skrynyk says that came from High Prairie and Slave Lake, as well as the Kinuso area.
The rodeo hasn’t been held for about 15 years, but it is nothing new to the area. Skrynyk says the Kinosayo Museum has a program from the ‘35th annual’ Kinuso rodeo, in 1946, meaning it started in 1912! The event moved to Spruce Point Park in 1967. 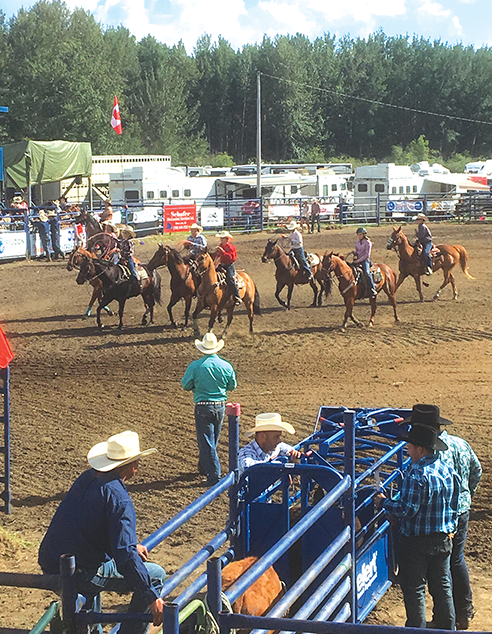