The wrestling program at Roland Michener School kicked off last week with tryouts and practices. Head coach Ian Doetzel says 47 tried out and 43 made the cut. Seventeen are rookies; 15 are girls and 28 are boys.
One of the girls, who is also a rookie, is Charlotte, who told The Leader at “the first tryout I almost died.” However, she didn’t, she made the team and seemed quite pleased about it.
“If you work hard you can push through anything,” she said.
Helping Doetzel out with the coaching last Wednesday were former Rams Brock Geddes, Dan Gerry and Monica Ziegler. Tyler Busk and Logan Wambolt are also lending a hand, Doetzel says.
The first tournament for the team is in Grande Prairie on Dec. 9. It will double as a tryout for the two major sport festivals this winter – the Arctic Winter Games and the Alberta Winter Games.
Practices for the Rams are Mondays and Wednesdays from 3:30 p.m. to 6:00 p.m. 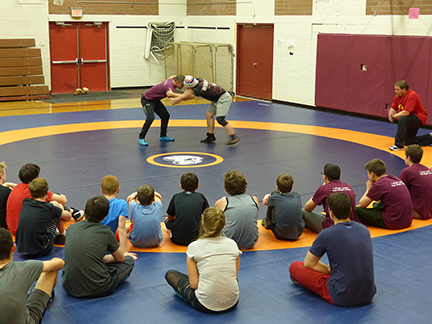 Former Rams Brock Geddes and Dan Gerry demonstrate some wrestling moves for the team at one of the first practices of the new season.