Early moments of the game had coach worried

Coach Christopher Rowe says that the game started slowly. Neither team was able to score during the first six minutes of the game. The pace started to pick up late in the first quarter and into the second quarter, with both teams scoring points.

“I was worried that we may lose with the opposing team having a small lead,” Rowe says.

Rowe explains that the Rams were able to turn the tide. They began outscoring the Knights and maintained a comfortable lead.

As for stars of the game, Rowe points to Nick Carpenter and Jacob Hartman. Carpenter worked hard to create plays for the rest of the team. Hartman was able to make some “pivotal baskets when we needed them.”

That said, Rowe says the entire team has an impact on the success.

The junior Rams had been working hard on offensive plays. Rowe says this was to ensure that the team is moving around while staying open for passes.

Rowe believes the big lesson coming from this game is defense. He bases this on the beginning of the game when the Rams could not execute their plan successfully.

This win leaves the Rams with eight wins and only one loss. Rowe says it has definitely been a good season so far.

“The students are enjoying the season and excited to play more in the coming weeks,” he says.

With the win, the Rams managed to keep pace with their hard-charging cross-town rivals the St. Francis Falcons. The Falcons have improved impressively during the season and handed the Rams their first loss of the season a week or two ago. According to the most recent standings released by the Smoky River Junior High Basketball League, the two Slave Lake teams were deadlocked at 14 points at the top of the Eastern Conference table. That was before last Wednesday’s games. However, the Falcons at that point had played two more games than the Rams. 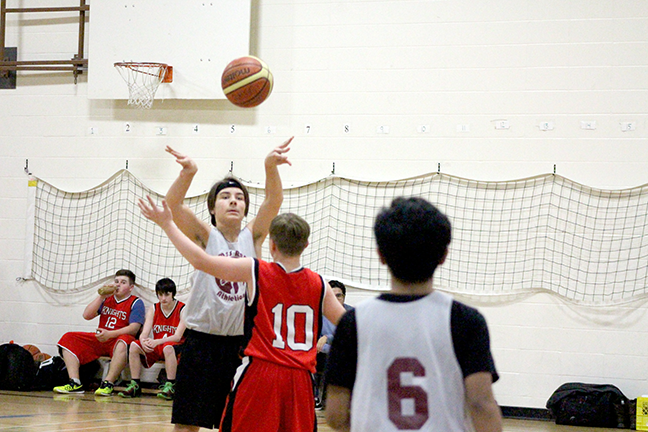 The Roland Michener Secondary School Rams junior basket ball team took on the Kinuso School Knights in basketball action on Feb. 14 at Roland Michener. The Rams beat the Knights 43-36. Passing the ball is Zane Lightening-Fillion of the Rams.