This year’s Rotary Top Five Under 20 awards were a bit different than usual in that one of the recipients was a group and another was two sisters. But the intent was the same: to recognize kids who are making a positive impact in their community.
The presentations were made at the volunteer appreciation banquet on Apr. 22 at the Slave Lake Native Frienship Centre, by Rotarians Sherri Smears and Julie Jantzi.
Going in the order they appear in the photo to the right, the five are Jayden Adams, Kailyn and Peyton Sherrad and (not pictured) the Slave Lake Army Cadets and Sarah Carrell. Taken from Smears’ notes, here are some of the reasons they were nominated:
Jayden Adams
“She is described as a young person who obviously wants to make a difference in the world. She has gone on several trips to the Dominican Republic and Mexico, but not for leisure! She volunteered her time to help build homes. This young lady has also volunteered many hours at CJ Schurter (School), giving extra support to students.”
Kailyn and Peyton Sherrad
These two girls, 10 and 11 years old, are described as “small wonders, who bring a smile to residents and staff at Points West. Thank you for bringing some sunshine to seniors in our town.”
Sarah Carrell
Her nominator described her as “one of the most compassionate and committed students this teacher has ever had the privilege of working with.” She’s been involved with the student union, helping to plan and carry out many events.
She’s also a member of the school’s welcoming committee and has taken anti-bullying training.
Sarah was away on a band trip at the time of the awards.
Last but not least, the Slave Lake Army Cadets, who also were not able to attend. They have “represented our community around the world and they did so in a manner which brings pride to all of us. This group of fine young men and women truly are hope for our future.” 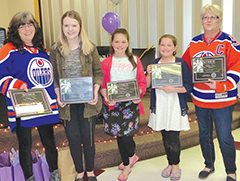