The Lesser Slave Lake Regional Arts Council (RAC) hosted its first annual ‘Zombie Fun Run’ earlier this month. The Leader hears from RAC secretary Megan McNeil that RAC has marked the day as a success and that she and board are looking forward to expanding the event next year.
“This was our first time organizing a fundraiser like this – we had a blast but also are going to change a few things for next year,” she says. “We want to partner with other local non-profits and organizations to make it bigger and better. We also are going to change the format of the run.”
According to McNeil, the fundraiser brought in over $200 which will be going towards future arts workshops.
A few months ago, RAC had a planning session to decide which programs will cap off 2017, McNeil says its her hope that every few months the board will do this.
“We are a very small group and having meetings like this make it easier for us to plan our activities,” she says. “But it’s also to make it easier for the community to get a glimpse at what’s coming up.”
McNeil adds, “Our next event is called ‘Screamfest’ and is on Oct. 28th at the Legacy Centre here in town. We will be showing two Halloween movies and the kids from Dance Creations will be performing at intermission. Entry is by donation and there will be snacks for sale.”
Next up, as RAC community involvement goes, is the Santa Claus parade in November and an All Seasons Market appearance in December.
“We were part of the Riverboat Daze parade and had a blast!” she says. “It’s a good way to get exposure and be part of the community. We’re really excited about this. We will be at the Dec. market selling tickets for our ladies’ night and hoping to get a few new volunteers on board.” 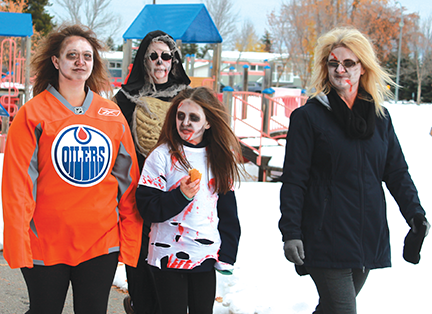 A scene from the recent ‘Zombie Fun Run’