Home Uncategorized Sharing a friendship and a tradition

Submitted by The War Amps

Ryley McMillan, 9, and Myles Newton, 5, of Stratford spotted each other for the first time through a fence that separated their neighbouring school and daycare. Noticing that they both share something special, they would often give each other a wave. Today, the boys share a strong friendship as well as a Remembrance Day tradition.
Ryley was born a left arm amputee and Myles a right leg amputee. They are both members of The War Amps Child Amputee (CHAMP) Program. War amputee veterans created The War Amps in 1918, its Key Tag Service in 1946, and later, the CHAMP Program. Since 1975, thousands of child amputees have received financial assistance for their artificial limbs through CHAMP and have attended regional seminars where they learn about growing up as an amputee.
For the past couple of years, Ryley and Myles have laid a wreath together at their local Remembrance Day ceremony on behalf of The War Amps Operation Legacy. By doing this, they pay tribute to the sacrifices of the war amputee veterans who started the Association.
Rebecca, Myles’ mom, says it is important for her son to mark Remembrance Day by laying a wreath. “To know that veterans were part of creating the CHAMP Program, which we are so grateful for today, makes it important for him to have that connection.”
It was at a War Amps CHAMP Seminar, an annual regional event for child amputees and their parents, that the two boys met for the first time without a fence separating them. Ryley has attended many seminars, which his mom, Crystal, describes as a powerful experience. “It put us at ease to know that he was going to be OK. The War Amps has supported us emotionally and supported Ryley to do things like any other child.”
But the boys’ friendship extends beyond the seminars and Remembrance Day. Rebecca says Myles looks up to Ryley, who often plays hockey on their backyard rink in the winter. To see Ryley not letting his amputation stop him from being active reminds Myles that he too can do anything he sets his mind to.
When war amputee veterans started The War Amps nearly 100 years ago, they could not have predicted that their legacy would be remembered and carried on for years to come by young amputees like Ryley and Myles. Thanks to the public’s support of the Key Tag Service, The War Amps vital programs for amputees across Canada will continue long into the future. 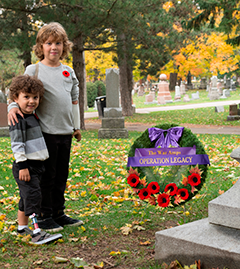 Ryley and Myles at the cenotaph