Trade show filled
Giesbrecht said all vendor spots in the trade show had been filled.
“As of right now, all of the lobby and the Pembina arena spots are both sold out,” she said.
The trade show is being held at the Slave Lake multi-rec centre on May 5th and 6th. Admission prices are as follows – $4 for a single, children under 12 and seniors are free and $10 for a family weekend pass.

No Daze fireworks
Giesbrecht clarified on what’s happening with the 2017 Riverboat Daze celebration.
“We will not be doing fireworks this year,” she said. “Since it is Canada 150th we didn’t want to have two weekends of fireworks and we will be putting the funds somewhere else.”
Giesbrecht added that a timeline will be drafted soon and once that’s done the planning committee will have a better idea on how many volunteers they need.
“The more organized this is the better event we will have,” she said.
If interested, there’s an open meeting on May 15th at the Holiday Inn in Slave Lake at 7:00 p.m.

Chamber turns 30
Minister of Children’s Services and MLA for Lesser Slave Lake, Danielle Larivee, spoke to attending members in celebration of the Chamber’s 30th anniversary.
“It’s truly a pleasure to be with you all here,” she said. “You’re the backbone of the business community and like many other long-time residents of Slave Lake; I’ve always very much enjoyed attending Chamber events.”
During her talk, Larivee went over some of the recent contributions to small business owners made by the Alberta government.
“At this point in time we as a government are interested in creating jobs,” she said. “The great news is things are looking up for this province and country as a whole economically.”
Also in attendance to celebrate the Chamber’s 30th anniversary were founding members Ken Giblin, former owner of Century 21 Realty and Jeff Commins of Southshore Hidden Treasures. “You’ve done a fantastic job with everything and especially the trade show,” said Commins. “I’m very proud of where it’s (the Chamber) gone and where it’s going.” 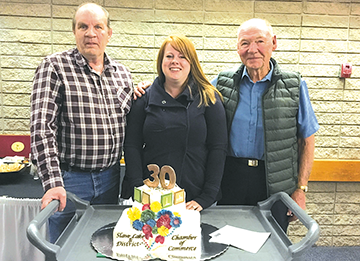