One of several changes at the Friendship Centre

Slave Lake’s Mat Program won’t be running this year. The overnight shelter for homeless people in the cold months was a local success story, but The Leader learned last week from Slave Lake Native Friendship Centre (SLNFC) treasurer Rebecca King that it is closed for the time being.
“We are working to secure funding,” she says, “but as of right now we have none due to a mismanagement of funds, so the mat program won’t be happening this winter.”
King declined to elaborate on the ‘mismanagement of funds,’ story, but did provide some details on what it takes to run the Mat Program. “It costs approximately $55,000 and that’s because we must pay for staffing and because we feed, clothe and provide necessities for the people who use the program,” she said.
King adds, “On average we have had 10 or more people coming in each night and now there’s nothing for them. (It) has been running for three years; we didn’t have anything before that and now we’re back where we started.”
For those wondering what the ‘mat’ stands for, simply put, it is what clients are given to sleep on.
The loss of the homeless shelter program is just one aspect of the changing environment at the SLNFC; when your Leader reporter visited there earlier this month, several volunteers were cleaning and reorganizing the entire building. The centre was closed, but is expected to re-open this week.
“We’re in the process of hiring a new executive director and support staff,” says King. “We received some community concern, so the board took on a more active role.”
Why the big shuffle in personnel?
“We (the board) had different visions from the former executive director,” she says. “The board is discussing how we plan to proceed but we’re probably going to be hiring five to six people in the next month or so.”
Apart from hiring new staff, King says community members can look forward to a larger second-hand store and a more organized donation centre.
“We were short-staffed so there was a huge backlog of donations to sort through,” she says. “We’ve moved the craft store to the other end of the building and have cleaned up a lot.”
According to King, a large portion of the donations left at the centre are people’s garbage and it gets quite costly to send it to the dump.
“It’s frustrating and we are putting together a better system because it ends up being really expensive for us to get rid of the garbage,” she says. 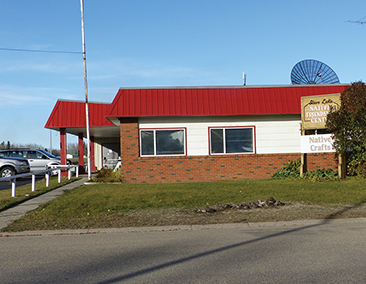 The Slave Lake Native Friendship Centre was closed last week, while a group of volunteers worked to get it cleaned up and ready to re-open for business. The board is pretty much looking for an entirely new staff, including an executive director.