Calling the Lesser Slave Lake area Alberta’s “best-kept secret,” Town of Slave Lake Mayor Tyler Warman welcomed visitors to the Slave Lake Visitor Information Centre’s grand re-opening on May 17. Warman – who also chairs the regional economic development group – talked about the importance of tourism as part of the economic development picture for the future.
“We want people to come,” he said. “We’re working hard on it.”
A lot of the work so far has gone into setting up (or ‘re’-setting up) the gift shop at the VIC. That’s been a two-or-three-month project coordinated by Ellen Criss. She told visitors at the event last week there are 33 regional artisans represented on the shelves of the VIC – everything from honey to jewelry to carvings to postcards. More will be coming, she said.
“It’s a work in progress.”
In the middle of a lunch catered by Boston Pizza, in walked two actual visitors off the highway, a man and a woman.
“We’re from Yellowknife,” said the man. “We’re architects. We just designed a visitor centre for Rankin Inlet.” They left with brochures and slices of pizza.
Partners in the regional ec/dev group are the town, M.D. of Lesser Slave River and the Sawridge First Nation. M.D. reeve Murray Kerik also said a few words:
“The lake,” he said. “Nobody knows it’s here. The river over here (Lesser Slave) – it’s one of the nicest canoeing rivers in the province. Fawcett Lake, Cross Lake – we need to get people know it’s there. We encourage our partners to get more things for people to do.”
Running the new tourism venture for the Tri-Council is regional economic development officer Darcie Acton.
“The VIC is HQ for tourism development,” she said, and introduced the new staff members who will be helping to make that development happen. Tri-Council’s ec/dev assistant is Marie-Lynn Starnes. Working for the season as travel counsellors are Chelane Lukan and Mikaela Michaud. A bit of quizzing of the latter two on local attractions and history showed them to be reasonably familiar with local amenities and even a bit of history.
“This is just a start!” said Warman, wrapping up the formal part of the program. He said the group hopes to make the VIC into something as a destination in itself, with interesting displays and a trail loop (currently under construction). He mentioned that the idea of having an old airplane as part of the display has been discussed.
The VIC is open Sunday to Thursday 8:30 a.m. to 5:30 p.m. Friday and Saturday hours are 8:30 a.m. to 8:30 p.m. 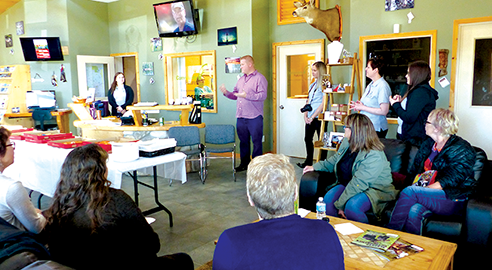