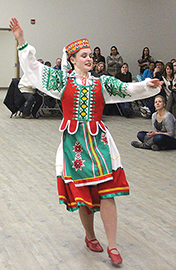 Kadin Pochynok, of the Athabasca Ukrainian Folk Dance Club, performed a solo dance routine during the Ukrainian Night held at the Smith Community Hall on Jan. 13.
Pochynok also performed dance routines as part of the 13-18 age group earlier that evening.
The Athabasca Ukrainian Folk Dance Club was back in Smith by popular demand, as they had performed at this venue before.
Those that attended were treated to a dinner that included perogies, turkey, ham, salad, rice and bacon described as unwrapped cabbage rolls as well as dessert.