Reps from the engineering firm Amec Foster Wheeler spoke with M.D. council last week about the project everybody would rather forget – the Poplar Lane rebuild.
Glen Newman did most of the talking. It was quite apparent from what he said and how he said it that AFW is hurting from the experience. The project took far longer than anyone expected; costs rose accordingly; M.D. council, angry about the escalating engineering costs, had uncomplimentary things to say about the firm, which were duly reported in this newspaper.
Newman was candid about it: “Our reputation is damaged,” he said. “It’s affecting our ability to do business here in Slave Lake.”
The job, Newman told council, should have taken 26 days. The contractor bid on a 50-day period and ended up taking something like 170 days to complete the project.
“In Alberta most contractors will move 5,000 cubic metres a day,” Newman said. “We estimated 2,500 a day, which any contractor should be able to do easily. But after an entire summer the project wasn’t even half done. They’d only done 400 cubic metres a day!”
The project ended up costing the M.D. something over $2 million, with nearly half of that going to the engineer. Or mostly going – Newman reminded council $38,000 still is withheld. He also listed his firm’s efforts to reduce its supervision costs along the way.
Calling the project “a dog’s breakfast,” M.D. CAO Allan Winarski said, “I’m just not authorized to pay you any more money.”
Newman pointed out that it would have been quite reasonable and legal for the M.D. to have sacked the contractor after that first season of poor performance. It was considered, Winarski said, but the main thing was to get the road finished and get things back to normal as quickly as possible for the residents out there.
“We’d have had a neighbourhood still in a mess,” he said.
Last word to Councillor Robert Esau: “I hope we learned that sometimes cheap ain’t cheap,” he said. 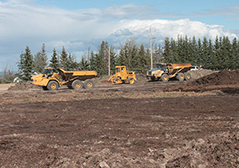