‘Someone is going to get hurt’

Somebody has been getting up to some mischief in Widewater/Canyon Creek. According to the president of the local ATV club, ATV riders on trails near the hamlet have found barbed wire and nails planted on or in the trail, apparently by someone hostile to ATV traffic.
“Someone is going to get hurt,” Adam Gongos predicts. “My objective is to stop this silly behaviour before it escalates into something worse.”
Gongos says one rider found “many feet” of barbed wire wrapped around trees “to wreck any ATV that drove by it.” That was a year ago. More recently another rider, he says, “got three tires out of four with holes in them.
Later, nails were found planted in the mud all along the trail, standing straight up. His dog also stepped on the nails, Gongos says.
Not just his dog. Clarke Fiddler told The Leader last week his girlfriend was walking on the trail when “she stepped on one of those spikes and it went through her sandal and up between two of her toes.”
This was the day after Fiddler was riding his machine on the same trail and the next morning found he had three flats. One of the tires had a nail in it – a match for the dozen or so his girlfriend found sticking up out of the trail the next day. 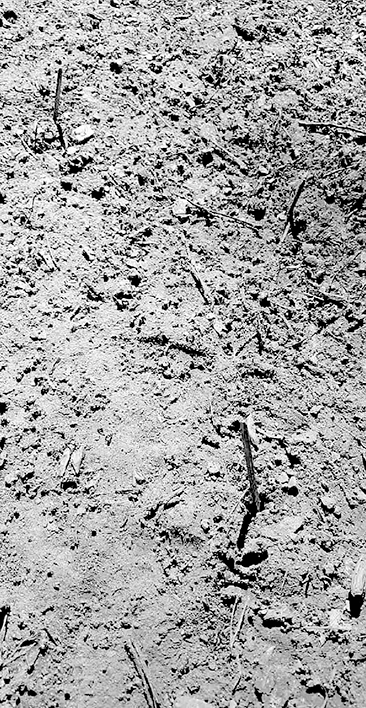 They’re a bit hard to make out, but there are three nails sticking up out of the trail in this picture.