Nobody was going to upset powerhouse E.W. Pratt from High Prairie in the high school division tournament for senior teams earlier this month. But given that, there was a real scrap for second place, and nobody fought harder for it than the boys from St. Francis of Assisi Catholic Academy.

Wow is right. For one thing, the Falcons got overpowered by Pratt’s second team in Friday night’s opener, and ended up facing them again in Saturday’s semi-final. This was just a half hour after a knock-down, drag-out slugging match against the GP Vanier Vipers of Donnelly. Mellsen describes it as a “tight, three-point contest that had everything from dunk attempts, to a young man shattering his kneecap.”

The Falcons won and faced Pratt JV again. This time the outcome was different.

“This contest was tight the entire way through again,” Mellsen says, “with Pratt hitting on all cylinders, and the Falcons working them inside.”

St. Francis won it, putting them against the senior Pratt Chargers, again with just a short break. Pratt won easily.

Roland Rams
The other senior boys’ team from Slave Lake in the tournament was the Roland Michener Rams. They battled hard but lost two straight – first to the Pratt Chargers and then to St. Francis in a Saturday morning contest.

On the girls’ side of the tournament, just three teams took part – EW Pratt, GP Vanier and Roland Michener. Pratt was the victor, with Roland Michener finishing third.

The season continued this past weekend for the Michener Senior Boys’ team; they played in the zone tournament in Edson. Coach Robyn Hollohan says the team has improved tremendously since September, but still has quite a way to go. In the Mar. 2/3 tournament, they started both their games very well offensively, she says, but struggled at the defensive end.

“Five out of nine fouled out,” she says, in the game against St. Francis. 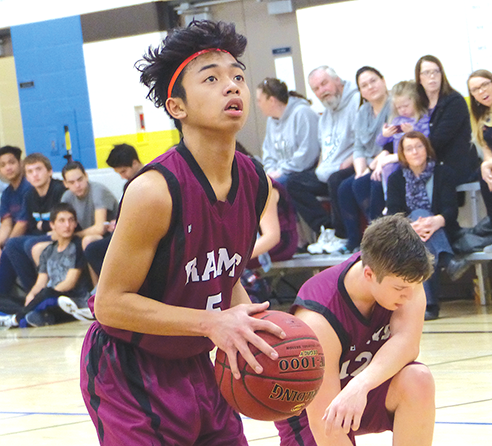 Nobert Ngannoy of the Roland Michener Rams prepares for a foul shot in a game against St. Francis on March 3.