Bella Twin, who lived on Rabbit Hill overlooking Slave Lake, shot the biggest grizzly bear in North America on May 10, 1953. But her bear wasn’t the first giant grizzly to put the town of Slave Lake on the map. Shortly before, homesteader Reinhold Eben-Ebenau also shot a giant grizzly.
Author Larry Loyie, Bella’s grandson, was proud of his grandmother. It made him angry when he heard that some people said her companion, Dave Auger, had actually shot the bear. “They didn’t believe that a tiny Cree lady could kill a giant grizzly with a single bullet from a .22, held together with chicken wire,” Larry recalled. “So they said it had to be Dave. They said the couple saw the bear coming along the cutline and waited until it was close enough to shoot it.”
Larry wrote his version of the grizzly adventure in As Long as the Rivers Flow. He added himself as a seven-year-old boy in the episode, to bring the story to life for students. In the book, Bella is surprised by the bear that suddenly rises above them in the bush, arms raised high.
Larry wrote: “Without warning, a giant grizzly reared up before them on the trail. Lawrence had never seen anything that big. The bear was as tall as their house. The grizzly towered over them, grunting and snorting. His huge front paws were raised high. Lawrence knew from the elders that this was a bad sign. Bears were most dangerous when they stood up, especially grizzly bears. The elders also said that to run from a grizzly was certain death.”
When students asked him about the bear, Larry told them this was probably what took place. He observed, “Bella was a good hunter,” he said. “If she saw a grizzly coming toward her, she would run like the wind in the opposite direction. She wouldn’t wait around to challenge a huge bear.”
The hide was displayed for many years in the Slave Lake beer hall, nailed to the wall. It moved on to the Reynolds Museum in Wetaskiwin, opened in 1955 by Stanley Reynolds. Today it’s stored at the Royal Alberta Museum in Edmonton, too threadbare to be displayed.
The bear’s skull was purchased from Bella Twin by Reinhold Eben-Ebenau. He asked Dave Auger to go into the bush and bring back the skull, says son Roland. His dad paid $15 for it.
Reinhold Eben-Ebenau had a reason. A short time before, he’d shot a giant grizzly, and sent his bear’s skull measurements to The Boone and Crockett Club, to be scored against other North American big game. Reinhold, a well-known hunting guide, learned that he had shot the biggest grizzly in North America.
That was, until Bella shot her bear.
The skull, used as measurement, is housed in a small museum on the Eben-Ebenau homestead. “The skull can’t be stretched like the hide,” reports Roland, second generation owner of the North Shore Homestead. “The measurements are precise and unchanging. Bella’s grizzly was the largest in North America at the time, being a few centimetres larger than my dad’s. Today, they are still among the biggest grizzlies to be recorded.”
The hole from the single shot that dropped the grizzly is clearly seen in the skull, beside the right eye socket. It is recorded that Bella pumped several other shots into the grizzly after it fell. Who could blame her?
To be continued…
Larry Loyie (1933-2016) set four books in Slave Lake: The Moon Speaks Cree, A Winter Adventure; When the Spirits Dance, A Cree boy’s search for the meaning of war; As Long as the Rivers Flow; and Goodbye Buffalo Bay. His most recent books are Two Plays About Residential School and Residential Schools, With the Words and Images of Survivors. His books are available at the Rotary Club of Slave Lake Public Library. For more information on Larry Loyie, see firstnationswriter.com or call Constance Brissenden (Edmonton, 780-474-1934). To order books, call 1-519-753-1185, ext. 1. 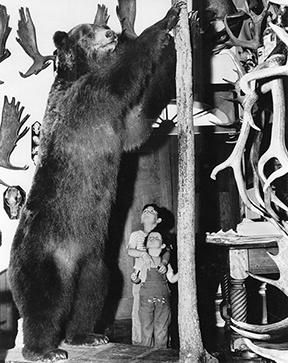 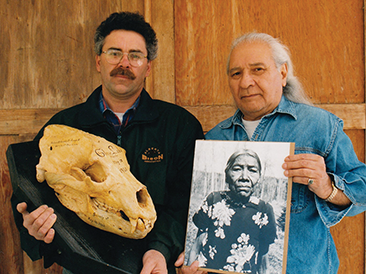 Larry Loyie, right, holds a photo of his kokum, Bella Twin, who shot the bear whose skull Roland Eben-Ebenau is holding.

Slave Lake in the 1940s during the period Larry Loyie wrote about in his books.