“I’m still in shock, to tell you the truth,” said Slave Lake Mayor Tyler Warman.
Warman was reacting to the news last week that Slave Lake’s airport was getting the lion’s share of provincial airport funding for its much-needed re-surfacing project. Transportation Minister Brian Mason made the $1.4 million STIP (Strategic Transportation Infrastructure Program) funding announcement, at the airport, on Wednesday, May 31.
Prior to last week, the prospects looked pretty bleak. The $2 million the provincial government had budgeted for airports this year was an improvement over previous years, true – but with dozens of airports needing upgrades, what were the chances of Slave Lake getting enough to make the re-paving even possible?
Pretty good, as it turned out.
“We don’t have much to put into local airports,” said Minister Mason. “Sometimes you have to pick a project. It’s all based on merit.”
It must be partly based on hard lobbying effort as well. Warman gave credit to SL Airport Commission Chair Mark Missal, who has been pushing for the funding for several years. So have municipal councils.
Lesser Slave MLA Danielle Larivee acknowledged the lobbying effort in her remarks: “I heard about it the day after I was elected!” she said.
The fact is – as Larivee also noted – the airport is an important hub for north central Alberta, serving as a centre for medical evacuations and as a base for air tankers in wildfire suppression.
The $1.4 million for the airport resurfacing is about 75 per cent of the total estimated project cost. It’s now up to the Airport Commission to figure out where the other $450-odd thousand will come from.
“We talked about it last night,” Missal says. “There are lots of options.”
Missal expects the project won’t go ahead before 2018, and that won’t be a minute too soon.
“We figure we had two years,” he says. “After that we’d be in big trouble. This buys us 15 to 20 years.”
Please see Page 2
Also in Mason’s announcement last week was news of funding for resources roads and bridges around the province, part of a $100-million commitment over three years. The recipients for this year include $300,000 for a bridge pipe project in the M.D. of Lesser Slave River (Ranch Creek), two culverts and one bridge project in the County of Big Lakes worth about $1.7 million, and $2.1 million for improvements to Cattle Ranch Road in the East Prairie Metis Settlement. 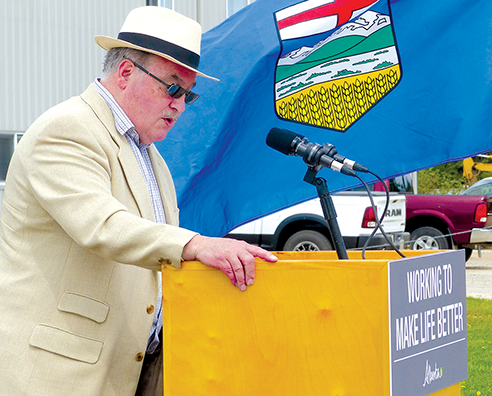 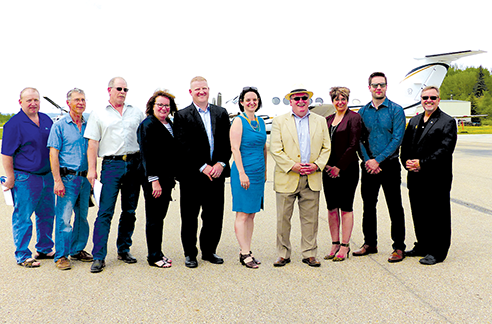