Two people were hurt, but are expected to survive after a tanker truck and trailer collided with a farm tractor near the Pibroch Hutterite Colony on Sept. 25. Three vehicles in all were involved. It made quite a mess and blocked the highway through that night and much of the next day.

A preliminary investigation determined a farm tractor was crossing the highway from the east. A southbound semi tractor with double tank trailers of liquefied petroleum gases was unable to avoid a collision with the tractor as it entered the highway. Both the semi and farm tractor were forced into the west ditch area. A southbound truck that was behind the semi tractor was unable to avoid a collision with a trailer that remained on the highway.

Both lanes of Highway 44 were re-routed around the scene, as a tank trailer was on its side across the width of the highway. The rest of the tanker unit was in the ditch, as was the mangled farm tractor. A Hazmat team was on the scene removing the gas from the tankers. The tank trailers were not compromised in either collision.

The male drivers of the truck and tractor were transported to hospital via EMS with serious but non-life threatening injuries. The driver of the semi-tractor was not injured. 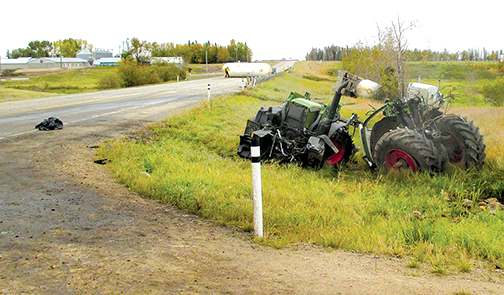 What was left of the farm tractor. 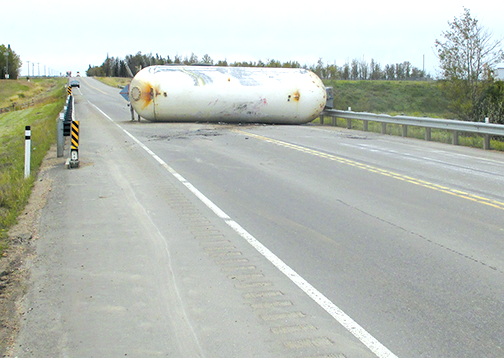 The tank trailer that had to be drained before it could be moved.