Terry Fox was just 18 years old when he was diagnosed with cancer in his right leg and was in his first year of university studying kinesiology.
He would later have that leg amputated six inches above the knee and went through aggressive chemotherapy to eliminate remaining cancer cells. As many people do when faced with a situation such as this one, Fox is said to have experienced a ‘fight or flight’ emotion – he choose fight.
According to the Terry Fox Foundation, since Fox ran in 1980, Canadians have raised over $750 million for cancer research. This money has been invested into projects, such as Multiple Myeloma Molecular Monitoring that is currently underway in Vancouver, Calgary, Toronto and Montreal.
This year, over 700 communities will take part in the annual Terry Fox Run and Slave Lake is one of them. Registration opens up at 11:00 a.m. at Schurter Park with the race starting at noon. For more information, contact Rhonda Willis at [email protected] 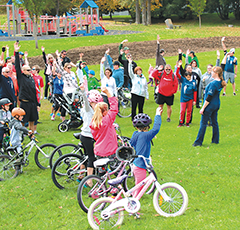