Town councillor Joy McGregor had a comprehensive report for her colleagues on all the business discussed at recent meetings of the sub-committee on health. Good news includes two new nurse practitioners at the Family Care Clinic (FCC) in Slave Lake, and three new doctors on their way.

On the not-so-good-news front, McGregor said she’d learned from the health care managers on the committee that the so-called ‘opioid crisis’ involves a lot of people who the general public might not suspect as drug users. People like you and me, was how she put it, who got started down a slippery slope by prescribed pain medication.
On another note, ‘no-show’ rates at the FCC, despite efforts, are still in the five to six per cent range, which is not good. These are the people who miss appointments and don’t call ahead to let the clinic know they won’t make it. It aggravates the wait-time issue and results in frustrating inefficiency, with doctors or nurses waiting around while they could be seeing walk-in patients.

Slave Lake councillor Darin Busk brought up the matter of the fire department being called on to fill in when ambulances aren’t available. It’s not a good situation, he said. Either we have to provide more training for the firefighters, or…..
“That’s a gap in our system right now,” he said.

Regional water project
Doug Baird of the Town of Slave Lake had a slide show on the latest developments in the regional water project. It showed the phases of construction of the intake house in Wagner and images from the fast-moving pipeline installation between there and the town treatment plant. Councillors had lots of technical questions, which Baird fielded easily. How are leak tests done, for example, and the relative costs of open trench vs. boring for line installation.
The pipeline is expected to be in the ground and ready to go by the end of May, and the pump house by the middle of August.
“All in all, it’s on schedule and on budget,” he said.
Work on the pipeline is going well, Baird said, but it will likely get more complicated as the ground thaws. He showed a slide indicating that the groundwater level at one point along the Sawridge Road is only inches below the surface. The average groundwater depth along that flat country directly west of town is about 18 inches to a couple of feet. He described the ground the contractor is boring through as “soup.”

Advocacy
M.D. reeve Murray Kerik made a plea to his colleagues to “get coordinated” for advocacy purposes. Noting that the three bodies involved in the tri-council have a lot more clout in that regard than any of them do on their own, he said it makes a lot of sense to work together. But we need a plan, he said.
Slave Lake Mayor Tyler Warman agreed.
“It’s crazy how much power there is with three logos on a piece of paper,” he said.
A possible example of that is the recent news from the province that it is contemplating a rest stop with rest rooms on Hwy. 44.
“We’ve been fighting for that for 15 years,” said Kerik. “We sent a letter from tri-council and something moved.”

FireSmart
FireSmart coordinator Brandy Walters (with support from Slave Lake mayor and FireSmart Committee chair Tyler Warman) brought members up to speed on what that organization is doing. The FireSmart group was asking tri-council to approve an additional $95,000 this year, “to support the marketing, education, community outreach and engagement and agency relationships of FireSmart…”
Council approved the request. 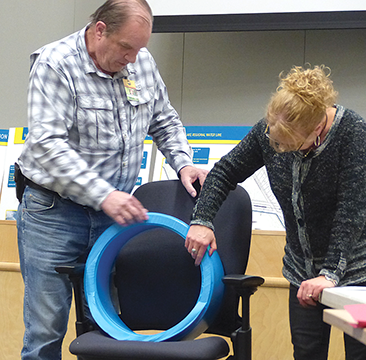 M.D. councillors Jeff Commins and Sandra Melzer check out a sample piece of PVC water pipe during a break in the Regional Tri-Council meeting on March 7.