Home Uncategorized The man in the sky; 100 feet high

Fire lookouts are an integral component of wildfire detection in Alberta.

Wildfire Information Officer Leah Lovequist for the Slave Lake Forest Area says a fire lookout is located where visibility is good to detect and report wildfires. She explains in the province of Alberta there are 127 fire lookouts, 23 mountain lookouts and 107 steel towers topped with a cupola.

The observer also provides continuous updates on the wildfire until the wildland firefighters arrive.

The fire lookout observer’s area of responsibility to keep watch is a 40 kilometre radius around the tower.

Galen is a fire lookout observer and has served 13 wildfire seasons working in the Slave Lake Forest Area.

“I am responsible to provide weather readings twice a day  – every day.” The wildfire danger level determines the amount of hours to watch for smoke. During times of extreme wildfire danger, Galen says he is up in the tower for 11 hours straight.

During low times he climbs the twice in the morning and in the afternoon every two hours until 6:00 p.m. When Galen spots smoke he quickly determines the location and provides information to the Slave Lake Fire Centre.

This past May, Galen spent 28 days straight on very high to extreme alert, which means he spent nine to 12 hours a day up in the tower watching for smoke.

“It was very exhausting,” he says. “Things are quieter now with the frequent rain.”

Galen began his service as fire lookout observer in 2006 in the Slave Lake Forest Area after working in construction and needing a change.

“I had a friend who was a fire lookout observer in Alberta and thought that sounded interesting.”

“I spent 160 days in the lookout and spotted over 30 confirmed wildfires my first season.”

Galen explains that the tower was close to a community and he was extremely busy.

Some of the types of fires he spotted included both lightning and human-caused wildfires. As well Galen had 150 fire permits to observe and track over the season.

“The toughest day I had was when I had a close encounter with a bear,” says Galen. “I was sitting in my shed reading and heard a sniff…sniff, I looked over and saw something black sniffing my elbow, I jumped up in shock,  which also scared the young bear and he ran off.”

Galen says that he likes the seclusion and self-sufficiency of being a fire lookout observer and keeps busy by meditating for two hours a day, gardening and painting.

When Galen is done for the season, he heads home to the Okanogan B.C. where he helps his friends look after their honey farm.

“I also teach Buddhist meditation,” he says. “Last year I went to Mexico to teach a 10-day meditation course to 80 students.” 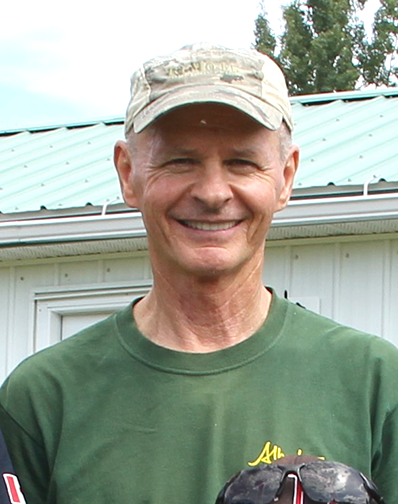 Galen (last name withheld as a matter of policy) 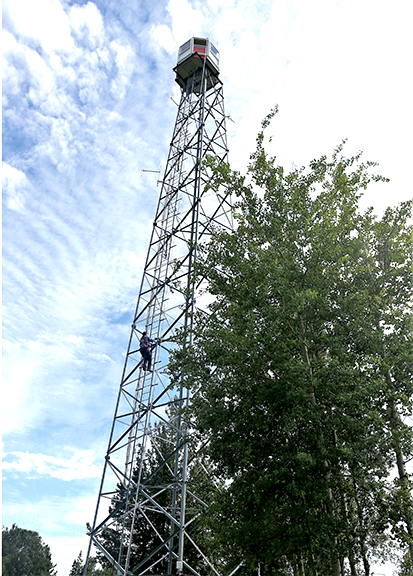 Galen scaling the 100-foot-tall lookout tower to check for smoke in the area.