Do ambulances put their sirens on ‘just in case?’ In other words, if there is no traffic to speak of, but the sirens are blaring anyway, is that because policy requires it? Or do those guys just like to cut loose and make an impression? Just wondering.
* * * * *
It’s not just every day you see a young lady (or anyone else) hauling a heavy fuel hose across an airport apron to service a helicopter that is on an around-the-world epic journey. So when your Leader photographer saw exactly that last week, he snapped a picture of part-time pilot, part-time fueler Kristen Mozdzen fixing to fill up the C150 Global Odyssey chopper on its stop in Slave Lake. 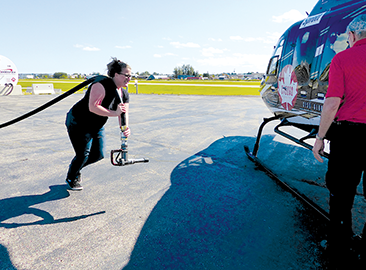 Kristen Mozdzen, leaning into her work as an aircraft refueler.

* * * * *
Have we mentioned before how much we love short weeks in the newspaper business? And how it brings out the sarcasm in us? Maybe we have.
Speaking of the newspaper biz, last week we called up our counterparts at papers in Edson, Athabasca and Mayerthorpe to pass on the good news that young men from their towns (or near their towns) are provincial ‘AAA’ junior baseball champions. Their names are Nick Mulich, Brandon Hermanson, Justin Kwasny, Randall Weber and Lee Worobec and they play with the Slave Lake Jr. Heat. These guys (not to mention their parents) put in a lot of extra hours and days to practice and play always on the road. It would be noteworthy even if they hadn’t just completed a Cinderella season. For all we know they are getting recognition in their home towns, but we thought we’d give the respective local newspapers a nudge just in case. Judging by the response to three phone calls, those papers had no idea that these fellows existed, let alone that they were provincial champs. But now they do.
* * * * *
Northland School Division, which operates schools all over the northern part of the province, informs us it has appointed Nancy Spencer-Poitras as Associate Superintendent. She’ll be responsible for leadership, support, etc. in Area 2 of Northlands, which includes schools in Wabasca, Calling Lake, Chipewyan Lake and Sandy Lake. 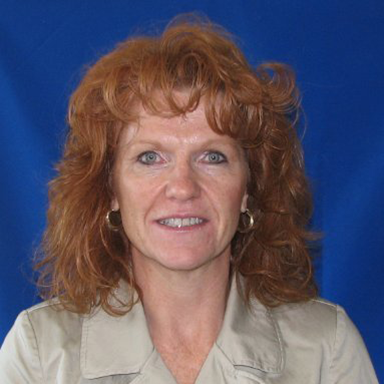 * * * * *
Good job to the folks who stepped up at short notice to form an ad hoc choir for the memorial service last Friday for Stella Boisvert. Not just sing – Neil Deas did a fine job of directing and Shane Rebryna did his usual number with style and grace on the piano. Thanks also to the lady who organized the whole thing (who prefers not to see her name in the paper).