It’s nice to see the slowpitch fields in Slave Lake getting some extra use, with a big tournament on the Aug. 12 weekend, and another one – we hear – coming up. Camping out right next to the highway though – that seems like not the best idea, especially when there’s lots of grassy space further away.
* * * * *
What do the NHL playoffs, Rogers Cup tennis and Slave Lake Alberta have in common? You guessed it – Wayne Gretzky. He was spotted watching the Oilers, was in the stands at last week’s tennis tournament and this Saturday will be in town for the Ice Breaker hockey game and banquet. Something to tell his grandkids about.
* * * * *
Meanwhile, don’t forget about the River Parade, happening on the Lesser Slave River at the M.D. boat launch this Saturday, Aug. 26. Participants are invited to dress up their floating craft – canoes, rafts, tubes, kayaks and what have you and compete for prizes as they float down from the town pumphouse to the boat launch, where free burgers and dogs will be sizzling. The event is to celebrate the completion of The Great Trail, otherwise known as the Trans Canada Trail. The river has been designated a ‘blueway’ section of the trail from Smith to Slave Lake, closing a gap in two ‘greenway’ sections of the trail. Oh, and some flotation equipment is available! The festivities get going at 10:00 a.m. See you there!
* * * * *
The parking lot construction by the Legacy Centre in Slave Lake is actually a High Prairie School Division project to improve its side of the shared parking lot. So we hear from somebody who should know.
* * * * *
A friend of Page 9 was telling us the other day he attended his first Treaty Days event in Wabasca, picking up six years’-worth of treaty payments, which amounted to $30. So the question is – how much was five bucks worth in 1899? Luckily there are all sorts of resources online these days for calculating that sort of stuff, and some of them might even be accurate. One says (speaking of U.S. dollars, mind you), that $100 in 1899 would be worth $2,724 in today’s greenbacks. So, dividing that number by 20, we get…….$136. You could buy as much with that five dollars back when Treaty 8 was signed as you could today for $136. Dinner for two? Apparently the box of shells has been discontinued.
* * * * *
You gotta love construction season. There was a 40-minute wait on Hwy. 2 west of Slave Lake the other day, we heard, for chip-seal work on the road.
* * * * *
Jerry Wallsten is no fan of Alberta’s carbon levy, and has the figures to prove that it’s “exorbitant.” He says 56 per cent of his natural gas bill (the small part that is actually for the gas) is carbon levy.
More than doubling the gas portion of his bill is one thing; the other objection he has is that the levy completely fails in inducing him to reduce consumption. His home, he says, is about as energy-efficient as it can be. So the levy amounts to a consumption tax, pure and simple. A plain old revenue grab for the government.
There are many sides to this story and that is certain one of them. Are there perhaps examples of how carbon levy-funded incentives are doing what they were intended to do? We’ve been hearing rumours from the farming districts of those incentives getting favourable attention from some of those folks.
* * * * *
Lots of people were talking last week about the solar eclipse that was coming up at the beginning of this week. Worrying about their dogs going blind and so on. We have to admit we’d never heard of that particular hazard, but stranger things have happened! 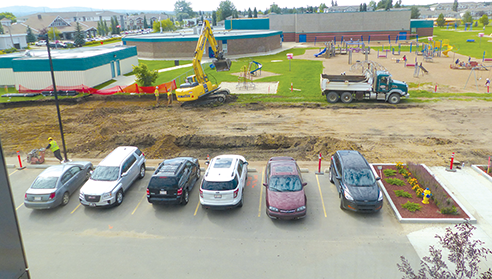 The view from above of the parking lot work going on between CJ Schurter School and the Legacy Centre.