It’s all fun and games until the power goes out – unfortunately that’s what Smith and Hondo residents had to deal with during last week’s flurry frenzy. A source told your Leader reporter that an ATCO worker may or may not have told a friend of his that the he’s shocked a more serious power-outage has not occurred already. We’re told that the ATCO electrician even said he’s surprised that the lines are still working, despite being ‘rotten’. It took crews over 24 hours to get a stable connection.
* * * * *
Again with the snow…and why not? It seems like once it starts everyone goes into panic mode and forgets that we’ve had it before. The weather is supposed to improve, which is good for those who haven’t gotten their snow tires on as of yet. But in all seriousness, switch them over! It didn’t take long for the roads to become dangerous last week, especially the highways.
* * * * *
For those who don’t know (and for those who might care) it’s small business week this week. The Slave Lake and District Chamber of Commerce have some events going on, including two seminars that are geared to help business owners get more acquainted with the digital market. For more information on what’s going on visit the Chamber’s website or Facebook page.
* * * * *
It can get rather frustrating hearing people say that there’s never anything happening in town. There is and you just have to open your eyes and look. For instance, did you know that there is a community Halloween movie night happening next weekend? It’s on Oct. 28 at the Legacy Centre. Well, now you know. That’s all, as you were. 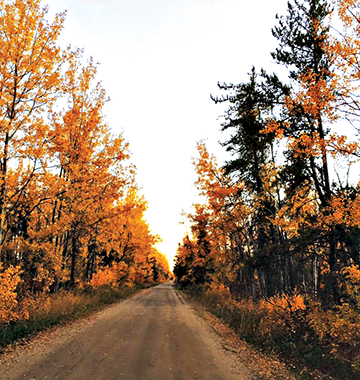 It’s hard to believe that this picture was taken only a few days before winter made its early appearance in town.