The annual Songbird Festival is coming up pretty soon. This is the celebration of songbird migration and banding that takes place at the Boreal Centre in Lesser Slave Lake Provincial Park. It’s been going on since the mid-1990s and always brings bird-loving people to town for a weekend. No doubt our bird-banding columnist, Nicole Krikun will have something to say about it in her weekly column.
* * * * *
Fishing in the lake (Lesser Slave) and the river above the weir opened on May 15. We have inside information that a certain fisherperson was out there at 5:30 a.m. on that day, to catch the first fish of the season. She got a few jackfish (or pike, if you prefer) bites, but released them all. No walleye.
* * * * *
It’s unlikely anything that starts in Paris or Madrid or Mexico City will trickle down to little old Slave Lake, but you never know. Those cities are talking about banning diesel vehicles, after new studies show pollutants in diesel emissions are killing people. It would be nice if owners of diesel vehicles would take that into account and act accordingly and not leave their machines idling unnecessarily – but don’t hold your breath. Unless you’re walking past one of those fume-spewing units. Then do hold your breath, because it isn’t good for you.
This is an even bigger issue in Europe, believe it or not, where a high proportion of vehicles have diesel engines. Mayors of some of the bigger cities over there are talking about ways of cutting those emissions. There will be howls of protest, of course. But the science is there. The fumes are hurting people.
* * * * *
The new Alberta law requiring helmets for all operators of, or passengers in or on off-highway vehicles will probably go over like a lead balloon around here. We predict a lot of people will ignore it. A few will get ticketed and feel hard done by. That’s the way it goes. Motorcycle owners had a similar reaction, back in the day. Some of them wouldn’t be alive now if they hadn’t complied. This new law, as well-intentioned as it is, will take some of the fun out of tearing around on your ATV. That’s maybe all that’s at stake, which doesn’t sound like much when it’s put like that. A few lives might even be saved, or brain injuries averted.
* * * * *
Kevin Simpson was good enough last week to update us on the progress of his daughter Tessa’s play at the Walterdale Theatre in Edmonton. Portrait of a Family Dinner had its debut on May 15. Kevin was there and said it went well, but he had to rush off to work and couldn’t tell us more about it. The play was due to run for five more nights, wrapping up on Saturday May 20. Congratulations to Tessa and all involved.
* * * * *
Nobody asks Page 9 what it thinks about sidewalk repairs in town, but that doesn’t mean we don’t have opinions. Having heard the town has money budgeted for such work this year, we’d like to put in a plug for some work to be done at the duck pond (skating pond in winter) that passes for a sidewalk by the 7-11. 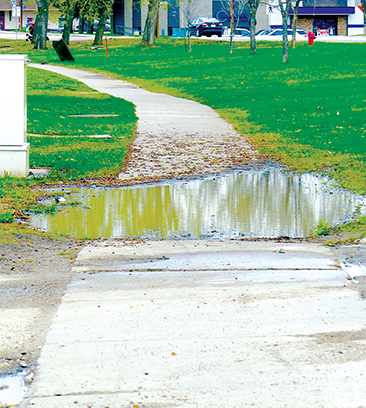 * * * * *
So, what else is happening out there? The Right is uniting in Alberta, we hear. Wildrose leader Brian Jean and PC leader Jason Kenney shook on it last week. We assume they’ll both run for leader of the new party, whatever it may be called. Good luck to ‘em.