One of Dennis Barton’s racehorses has been nominated for a provincial award. We don’t have any details on what Emma Jean Too did to earn the nomination, but Dennis has been invited to a gala awards event at the Chateau Lacombe in Edmonton on May 19 to find out if his horse won or placed. Or maybe showed?
Congratulations!
* * * * *
The Southshore Children’s Association is holding a community garage sale on May 26 at the Widewater Complex. It’s to raise money for the pre-school program the association runs there. That’s all we know for now.
* * * * *
Congratulations to Peter Block and Gail Ungstad of Slave Lake, who both finished first in their categories at the First Responders Race in Edmonton on April 29. Block did a half marathon, finishing in one hour and 39 minutes. Ungstad ran in the 10 kilometre event, completing it in 1:36.
Hot on the heels of that news tidbit was another news item from the city on a running race in which Slave Lakers participated. This was a night run in Fort Saskatchewan on April 28. No details on who competed from here.
* * * * *
Speaking of Barton, he dropped off a locally-produced cookbook called ‘History in the Baking: Moose nose soup and other time-honoured recipes of Lesser Slave Lake.’ It was produced in 2011 by the Slave Lake Adult Education Committee as part of its ‘Footprints’ project. Another part was recording interviews with elder members of the community, which are on DVD and available at the Rotary Club of Slave Lake Library – and, according to recent notices on social media, they’ll be showing up on the Town of Slave Lake website. If that happens somebody might actually see them, which was the point of doing them in the first place.
The cookbook is full of recipes submitted by local people, including the famous moose nose soup, provided by Jean Potskin. The book has many fine historical photographs from early times in and around Slave Lake, as well as a bit of poetry. Where to get a copy? Good question. The SLAEC doesn’t seem to have any.
* * * * *
What’s it take to get a decent cup of coffee around here? Just asking.
* * * * *
We were thinking of doing something more about how motorized vehicles and pedestrians don’t mix. Maybe it’s too obvious, but apparently not to the people who plan cities and towns. Once upon a time every street belonged to people on foot. Over time, wheeled vehicles pushed walkers off to the edges. Sidewalks are supposed to take care of this marginalized segment of urban society. Three people that we know of have been killed in Slave Lake while walking across a street at a crosswalk. Best not to assume anything about the alertness or awareness or even the wakefulness of any driver. Likewise drivers can’t assume people walking or riding bicycles – not to mention fellow drivers – will do the sensible thing.
* * * * *
Hey, guess who showed up at the office the other day? None other than former Slave Lake resident and itinerant piano tuner Harvey Burkholder. Harvey turned 80 not long ago, but doesn’t look a day over 67, or act it. He had a book on ancient Japanese clay figurines that an acquaintance from Kamishihoro (Slave Lake’s erstwhile sister community) had sent him, hoping it could be donated to the library.
The guy who sent it stayed with the Burkholders in Slave Lake when a delegation from Kamishihoro visited back in the 1990s. His name is Miyawasa (‘Niko’) Ishakawa. 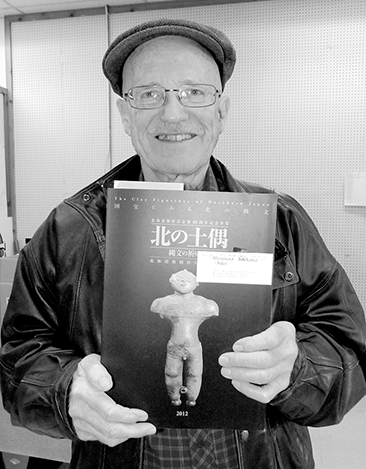 * * * * *
Attention Rotary NHL playoff poolers: user name is rotary2018. Password is slavelake. Just like that. Lower case, no spaces. At officepools.com. Knock yourselves out.
Go Jets! 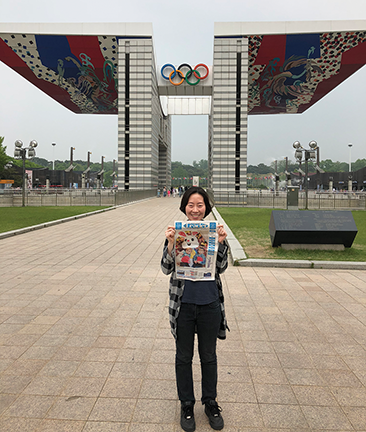 The Leader is everywhere! Friends of this newspaper have been sending photos of The Leader in unlikely locations over the years from all over the world. Here’s the latest: Leader employee Sunny Kwon is visiting her family in Korea and last week sent us this photo of her holding the April 4 Leader at the World Peace Gate at the Olympic Park in Seoul.