Things could always be worse. For example, you could live in Red Deer, and have trees blowing over on your car. Something like that happened to somebody connected to somebody at The Leader office.
* * * * *
Here’s something you don’t hear every day: a certain person who may or may not work at The Leader tells us she was close to committing murder (not really) the other day when the two guys she was riding in an elevator with caused the thing to shut down, due to ‘horsing around.’ Two hours later, the trio was rescued by the local fire department, with the TV cameras rolling. Good for a laugh later, she says, but at the time it didn’t seem so funny. It’ll probably be downright hilarious by the time it shows up on the Discovery Channel show on the regional fire service.
* * * * *
And speaking of TV shows being filmed in Slave Lake… Rumour has it that another reality TV show is being filmed right here in Slave Lake, for TLC. The Leader hears the series is focusing on a local set of quadruplet sisters. Keep your eyes peeled for a camera crew; apparently they were in front of Canadian Tire early last week shooting.
* * * * *
Congratulations to former Slave Lake resident Kimberly Poitras, who was recently named to the provincial synchronized swimming team in the 13 – 15-year-old age group. She joins nine other girls on the team, which will represent Alberta at the SYNC competition in late July.
This news was relayed to us via Kimberly’s mom Trisha, who may have been reminded to do it by running into your Page 9 correspondent when he was wandering around in a daze in the west-end Costco on June 20.
* * * * *
Our story last week on the Poker Run winners had a slight error. Ryly Savage won second prize – the dart board package and Fred Wilson got third prize, which was a chainsaw package. Further clarification (thanks to Ellen Criss) on who sponsored what: Whitecap Chev, Buick, GM sponsored lunch and St. Peter’s Church members served.
* * * * *
Hey is the Kevin Morrison who is looking after streets and such for the Town of Fairview the Kevin from Slave Lake? Sure sounds like him. We stumbled across his name when looking at some Fairview council notes online.
* * * * * 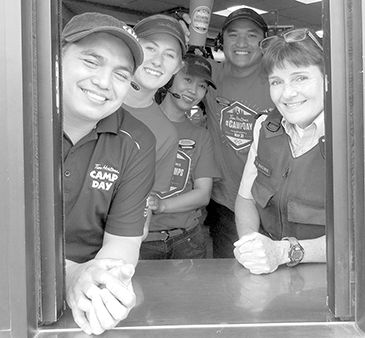 For some reason we never got this Tim Hortons Camp Day photo into the paper, so here it is now. The annual fundraiser helps send kids to Tim’s camps across the country. Pictured is RCMP Sgt. Marlene Brown, one of the celebrity servers, with Tim’s staff members Arman, Agatha, Rachelle and Neri.