By now all that nice April snow has probably disappeared. But as this was being written, it was still coming down, the roof in the Slave Lake Plaza was leaking like a sieve and the people who had just changed to their summer tires were cursing their bad timing.
On the other hand, the moisture and cool temperature were kicking the shite out of the wildfire hazard, not to mention keeping the mosquitoes at bay.
So there you go.
* * * * *
Meanwhile, out on the thin ice, word from the fire department folks is they helped a stranded dog and the person (or people) who were thinking of trying to rescue it get back safely.
* * * * *
Around 200 people will be in town on the 28th and 29th of this month, we hear, to take part in the ‘EMX 17’ training exercise hosted by the Lesser Slave Lake Regional Fire Service. Fire chief Jamie Coutts tells us emergency management folks from as far away as Medicine Hat and High Level are taking part. There’ll be all sorts of training courses and mock scenarios, including a big search and rescue exercise.
* * * * *
We got the dates for the upcoming Slave Lake pow wow wrong in the April 12 edition of The Leader. The proper dates are July 21 – 23. Sorry about that!
* * * * *
Kevin Simpson was in the other day to let us know his daughter Tessa’s play will be performed May 15 – 20 at the Walterdale Theatre in Edmonton. It’s called Portrait of a Family Dinner and is one of two winners in the Walterdale’s ‘From Cradle to Stage’ program for encouraging new or up-and-coming playwrights. So if you’re in the city on any of those dates….
* * * * *
Thanks to Charlotte from Canyon Creek for bringing something to our attention from the April 12 ‘Commentary’ page. In the column entitled ‘What does retirement look like if you haven’t saved?’ author Steve Burke of Practical Money Skills talks about a maximum retirement benefit of $2,153 per month (starting at age 62). This didn’t sound right to Charlotte, so she called and asked if we had contact info for Mr. Burke. A bit of online searching turned up the answer: his information was about the U.S., not Canada.
* * * * *
How many coffee cans does it take to catch all the drips in a leaky roof? Answer: more than we had at The Leader last week, but adding our garbage cans we managed to catch most of it. Not counting what was running down the walls.
Who invented those stupid flat roofs anyway? Somebody who lived in a desert, probably. The building The Leader is in leaks every single year. And every single year the owner has somebody up there re-tarring it. Now there’s a new owner. We’ve got news for you; it doesn’t work! Put a pitch on the doggone thing and the problem is solved.
In the meantime, we’re drinking as much coffee as we can to create more drip-catchers. 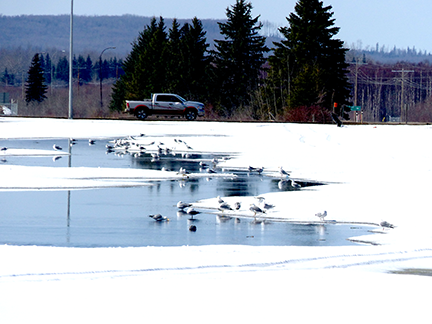