Part 3 in an occasional series on Slave Lake history and people.

The Second World War years brought huge changes to Slave Lake, Alberta. Six years of war (1939-1945) launched its transformation from an isolated town to a crossroads on the way to Alaska.
Award-winning Cree author Larry Loyie, born in Slave Lake in 1933, shared these challenging times in his memoir, When the Spirits Dance, A Cree Boy’s Search for the Meaning of War.
The Loyie family lived on Rabbit Hill, overlooking the small town with its muddy streets and board sidewalks.
Like many families, they still lived a largely traditional life. Marie (Twin) Loyie raised her 10 children in a log house with no electricity or running water. Each summer, she collected berries and medicine plants on the bountiful sand ridges hugging Lesser Slave Lake’s North Shore. Victor Loyie was a hunter, trapper, packer, and labourer. Larry, known then as Lawrence, loved this way of life.
Many men and women left the Slave Lake area to serve with the Canadian Armed Forces. In When the Spirits Dance, Larry Loyie describes his uncle, Henry Ward, arriving at the log house to say goodbye. His brother, Frank Ward, drove a wagon pulled by two of “the shiniest, blackest horses Lawrence had ever seen. The studs in their leather harnesses glittered like silver in the sunlight.”
Larry recalled, “First Nations people took good care of their animals… They were an important part of a family.”
When Uncle Henry, a storyteller, jumped down from the wagon, Lawrence stared at him:
“His uncle looked like a stranger. He wore shiny black boots and a uniform the colour of moss. On his head was a wedge-shaped cap tilted at an angle.”
Henry Ward, like so many, was off to war. Victor Loyie was soon “called up.” He left on the Northern Alberta Railway steam train for basic training with the Royal Canadian Artillery in Edmonton.
As an adult, Larry Loyie wondered why his father was called up. Victor Loyie was 43 years old, with a large family, and unable to read or write.
In 2004, Larry’s research took him to the military records section of the Library and Archives Canada in Ottawa, Ontario. The librarian photocopied many pages about Victor Loyie’s years of service.
The author was surprised to learn that his father had lied about his age and signed up in the First World War (1914-1918). Today, these and the records of about 640,000 people who served Canada in the First World War are being digitized. Some are already available online.
Victor Loyie spent a short time overseas before the “Great War” ended. But because he had joined the war effort, he lost his Aboriginal status. He was also eligible to be called up in the future by the Canadian Armed Forces.
By 1942, soldiers were desperately needed overseas. Victor Loyie did return home safely, but never received the rightful benefits allocated to returning soldiers.
The Second World War brought hard times to Slave Lake. With food going overseas to feed the troops, families received ration books and stamps for what was left. The Canadian War Museum notes that sugar, followed by butter, tea, and meat were missed by all.
Due to rationing, children lived without their favourite foods. Candies were rare.
One memorable day in 1942, a train passed through Slave Lake. It stopped at the railway crossing. Lawrence and his older sister Elizabeth were walking home from the Slave Lake community school. They spotted the train.
What happened next was thrilling.
Young men in beige uniforms hung out of the train’s windows. Some stood in the doorways of the cars.
One man shouted out, “Hey, kids. Over here!” Another yelled, “We’re the American army. We’re going north to build a highway to Alaska.”
Soldiers leaned out as far as they could to hand the children candy, gum, and chocolate bars. Some even threw coins.
For the two Cree children, it was a sweet day they would never forget.
To be continued…
Larry Loyie (1933-2016) set four books in Slave Lake: The Moon Speaks Cree, A Winter Adventure; When the Spirits Dance; As Long as the Rivers Flow; and Goodbye Buffalo Bay. His books are available at the Rotary Club of Slave Lake Public Library. For more information on Larry Loyie, see firstnationswriter.com To order books: goodminds.com. 1-519-753-1185, Extension 1.
Articles about the early years of Slave Lake, Alberta, are based on the books and research notes of Cree author Larry Loyie (1933-2016). They are written by Constance Brissenden, Loyie’s partner and co-author. 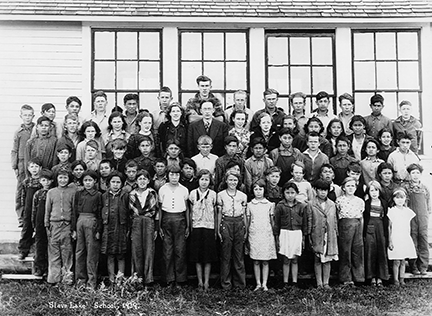 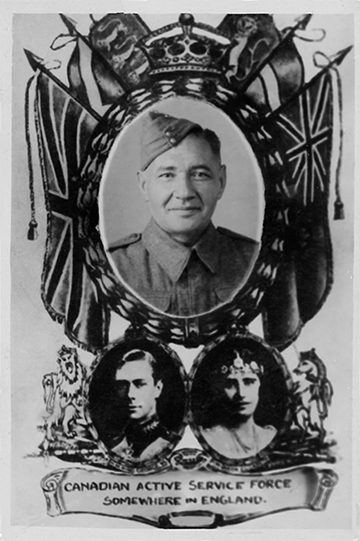 ‘Somewhere in England’ – a postcard from Victor Loyie to his family in Slave Lake, during his wartime service. 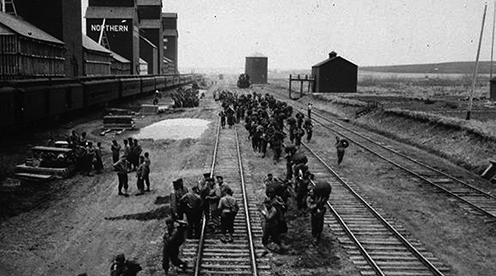