Home Uncategorized The story behind that popular East Indian buffet

The last Thursday of every month means it is time for the East Indian buffet at the Sawridge Travel Centre Cafe
Srini Jayaraman, the Director of Operations of the Sawridge Group of Companies, explained that he chose Thursday because he was looking to bring more people into the restaurant on Thursday nights. Fridays are already busy nights.
“We wanted to bring people out on Thursdays and give them a reason to go out to eat,” he said.
The buffet runs from 5:00 to 8:00 p.m. and there are various different East Indian-themed dishes. Jayaraman said he tries to introduce a variety of dishes. Some dishes change month to month but there are some regular dishes. The tandoori chicken and butter chicken are usually served each month while some of the other dishes, such as lamb roganjosh, da maharani, chicken birvani, carrot halwa, beef curry, fish curry and masala chai, aren’t always included. He explained that the two regular dishes are more well known in the western world and people like them.
There are some limitations on what the restaurant can do. In Slave Lake, the kitchen staff does not have the access to all the spices they would need. Jayaraman said he has to go to an Indian specialty shop in Edmonton to get those spices.
East Indian cuisine just encompasses one part of the food and culture of India. Jayaraman explained that food and recipes vary from region to region. The food of some of these regions may not have caught on in the western world yet.
This buffet was an idea from Jayaraman’s predecessor who was also from India. The buffet was held on a semi regular basis. Jayaraman decided to continue the practice because some of his staff is from India and it filled a unique niche in the community that was popular.
“There is a demand in town,” he said. “No one else was doing it.”
After holding a few buffets he found it to be successful. A customer suggested doing the buffet more regularly. Jayaraman decided at that point to do one a month.
On average, 75 people attend it. Out of the 75 people, he said 35-40 show up each time.
“It’s pretty significant for our town,” he said.
Jayaraman is not sure if he would want to do more than one a month. There is a challenge in repurposing some of the dishes into something else. If the buffet didn’t go well he could end up with a lot of food he can’t use and it would go to waste after a few days. The only item that is both on the regular menu and the buffet is the butter chicken.
Jayaraman said he understands that there is a perception that the food will be very hot and spicy. He explained this perception originated from the colour of the food and some may assume the food is loaded with red chili powder. That is not always the case.
“Believe me it is not hot,” he said.
Some of the spices uses are bay leaves, azwan seeds, cumin seeds, garam masala, black cardamom, fennel seeds, coriander power, turmeric powder and cumin powder.
Jayaraman used a comparison to hot chicken wings. He said if you can eat hot wings you should be able to handle the buffet.
“I’m saying if you can eat this (hot wings) why not eat the curry,” he said.
The next East Indian Buffet will take place on Dec. 21. It costs $17.99 plus tax. And just in case you are unfamiliar with Slave Lake, the Sawridge Travel Centre is located on Hwy. 88, across from the eastern end of Caribou Trail.

Just part of the array of East Indian delights available on the last Thursday of each month at the Sawridge Travel Centre. About 75 people show up each time. 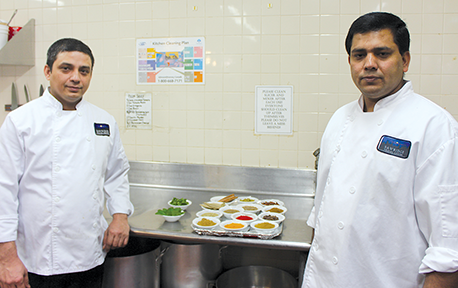 Singhs for your supper

Mukesh Singh and Sanjay Singh are two of the cooks at the Sawridge Travel Centre Cafe. They are pictured here with several of the spices used to make the food in the East Indian Buffet.

“There is a demand in town,” says Travel Centre manager Srini Jayaraman. “No one else was doing it.” He also says the food is not as hot as many people might think.