It’s been a while since The Leader checked in with the folks at Slave Lake’s Lakeside Outreach School. So at the urging of High Prairie School Division Trustee Joy McGregor we did that last week, sitting down for a chat with new vice principal Jessi Cardinal and a few of the students.
One thing that’s new is enrollment is up (“blossomed,” Cardinal says); another is that there’s a bigger-than-usual group making its way toward graduation next spring. Nothing’s guaranteed, of course, but there are 15 “actively working,” toward that goal, “who could very well graduate,” she says.
One of those is Tyrell Alook. He’s been a student at the school for three years; he says he made slow progress at first, but he’s got it figured out now, has the goal in view and is going well.
“I like it here better,” he says. “If I’m done stuff I don’t have to wait – I can keep going. And if I need extra time I can do that.”
The outreach concept of education has long been known to better meet the needs of certain types of student. Many of those, for whatever reason, have struggled in the regular system. They find the smaller numbers, the better access to teacher consultation and the chance to go at their own pace helps get them to get along.
“Students work with the teacher to decide what their goals are and what pace they are working at,” says Cardinal. “They don’t go on to the next step before they have mastered the one they’re on.”
For the most part, she says, this does result in a slower pace than what would normally be expected in a regular system. In some cases, however, it can result in speedier completion of courses.
“It’s way better!” says first-year outreach student Shaylyn Girard. “I’m already way ahead.”
Grade 11 student Benjamin Atkinson is also trying the outreach for the first time this year.
“I like it,” he says. “There’s definitely more resources here. I can get things done faster.”
Sara Keir is a Grade 12 student, new to Slave Lake, who has been in other outreach schools. She likes the “small, cozy, friendly environment,” of this one.
Getting back to the enrollment – Cardinal says there are about 80 regular students, including three in junior high and 15 in Grade 10. Another 10 students are in the ‘blended’ category, meaning they are also enrolled in other schools.
“It gives them more flexibility,” says Cardinal. 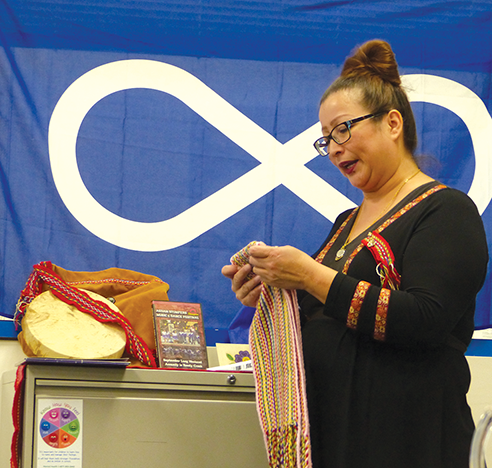 Hilda Lambert of the Metis Nation of Alberta, Region 5, talking about Metis cultural symbols to students of the Lakeside Outreach School in Slave Lake during Metis Week on Nov. 14.