Home News Town and M.D. finally get down to brass tacks and agree on cost-sharing disagreements

As reported in the last Leader of 2017 just before Christmas, things were looking very good for a new era of peace and good will between the Town of Slave Lake and the Municipal District of Lesser Slave River. As predicted, town council followed up and ratified the two major cost-sharing agreements between the parties. They are good for five years, meaning local governments can concentrate on other things.
Disagreements about who should pay how much for what had been simmering for a while, but blew up big during the municipal election campaign last fall. It became an election issue, with residents becoming aware of it for the first time and starting to ask questions. That lit a fire, and after the election, council and senior administrators bore down and worked some things out.
“It took a little extra time to build these agreements to protect the rights of all residents,’ said M.D. Reeve Murray Kerik in a joint news release. “Neither side got exactly what it wanted, but neither side really lost either.”
So what’s changed? The M.D. carried its point that it shouldn’t have to be paying a share of upkeep of smaller town parks and green spaces. In the previous agreement, the M.D. had to fork over a portion of the entire town parks and rec. budget, based on the assumption that a portion of M.D. residents use town facilities. That was one of the items in the Inter-municipal Cost Sharing Master Agreement, better known as the Inter-municipal Agreement, or IMA.
This agreement also covers such items as the dog pound, the cemetery, the road to the cemetery, ball diamonds, the swimming pool and the rec centre. Nothing new there, but one thing that is new in the new agreement, explains M.D. CAO Allan Winarski, is that the M.D. will provide a share of capital replacement costs for the pool, the MRC and the ball diamonds.
“This did not exist previously,” Winarski says. “This provides certainty to the Town of sharing and (allows) the M.D. to plan its financing.” On the other hand, Winarski says, “neither municipality sees new capital, realistically, on the horizon.”
Something else new in the IMA has to do with the mechanism for guarding against runaway costs. Winarski explains that previously, the M.D. had a 10 per cent ‘braking’ policy in place, whereby if cost increases went higher than 10 per cent, they’d pay only up to that amount. And the M.D. has invoked that policy at least once. The new agreement says the town will attempt to keep increases under three per cent. If more, “the municipalities get together to discuss this upfront at time of budget, (and) decide what to do, instead of after when the costs have already happened. This allows the Town to manage its affairs without undue M.D. interference but also provides safeguards for the M.D.”
Finally, the new IMA continues to allow the Town to receive a ten per cent share of any annual growth in applicable Mitsue Industrial Park tax assessment.
Fire Services Agreement
The stickler here was the method of calculating cost-share for the main fire hall in Slave Lake. There was never any argument about the M.D. directly benefitting from Hall 1, but the cost-sharing formula was complicated and open to interpretation.
“It was poison,” says Winarski, not pulling any punches.
The breakthrough came, Winarski says, when M.D. council offered a new 50/50 split on costs of the hall, instead of the former method of trying to figure it out on a per-incident basis.
Town CAO Brian Vance explains it thus:
“The M.D. will pay 50 per cent of all the operating costs of the hall and will get 50 per cent of the revenue generated. This greatly simplifies tracking costs and should reduce arguments.”
Roughly half the calls responded to out of the Slave Lake hall are from the M.D.
“Setting the rate at 50 per cent stabilizes the budgeting process and is overall fair for everyone,” Vance says.
The other new thing in the FSA is the M.D. agreeing to contribute $62,500 per year for the five-year term towards the capital cost of the new hall. This was apparently the final item to be negotiated and represents a compromise, since the town would have liked it to be higher.
“It is well below market rent for 50 per cent of a building and property of that size,” says Vance, “But there are other factors.”
The M.D.’s view, according to Winarski, is that it represents a “more than fair return on investment.”
At the signing ceremony on Dec. 21, Warman and Kerik were clearly pleased to be putting a difficult chapter in town/M.D. relations behind them.
“We needed to figure this out,” Warman said. “Both councils have been working hard on that the last couple of months. This process was enormous.”
He added that both the CAOs, “spent countless hours,” working on it.
Kerik, in his remarks, thanked everyone for their cooperation.
“We finally got down to brass tacks, quit dancing and got ‘er done,” he said. 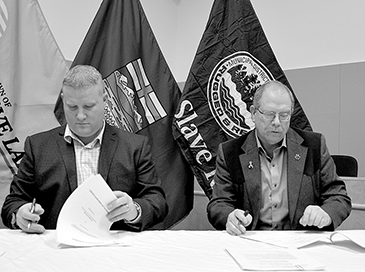 M.D. of Lesser Slave River Reeve Murray Kerik and Town of Slave Lake Mayor Tyler Warman take turns with the quill at a signing ceremony on Dec. 21, the culmination of a lot of work to settle differences on cost sharing.