Slave Lake town council passed what were described as a fairly lean pair of budgets last week – operational and capital. They’ll result in a 1.34 per cent tax increase across the board.

“We’re keeping service levels the same,” he said. “And finding efficiencies where we can.”

Speaking about the modest tax increase, mayor Tyler Warman said council and town staff “worked very hard,” to keep it as close to zero as possible. Since the past two years were zero per cent increases, he said, 1.3 per cent in three years is a pretty good result.

“But before we pat ourselves on the back,” Warman added, “we have an outstanding infrastructure issue, and that’s roads.”

Elaborating, Warman said at one time the town was funding regular road rehabilitation projects with special levies. That fell by the wayside through the 2011 wildfire disaster and recovery period – when a lot of provincial money became available for the repair of certain streets affected by the disaster. Recently the town has completed a 10-year capital plan, Warman continued, which calls for $2 million to be spent annually on road re-hab. But even with that, “we aren’t going to be able to keep up,” he said.

Council had discussed last year a return to local improvement levies (which would see benefitting property owners paying 30 per cent of the cost of road projects), “but council had no appetite for that.” However, dipping into reserves to get it done is unsustainable, and the problem only compounds as roads disintegrate.

Warman didn’t specify, but strongly implied some method of raising the extra money needed to keep up with road repairs is going to have to be figured out.

“Council is talking about it” he said.

Getting back to this year’s budget, Warman said when it comes to service levels, “if we’d done exactly what we did last year, it would have been a six per cent (tax) increase.”

How they cut that back by 4 ½ per cent without reducing service levels was partly by cutting or adjusting a few of positions on town staff. An example of that is that acting director of operations Calvin Couturier continues in that role, while also handling some of his public works superintendent duties, while sharing some of those with his second in command. There’s an overall saving in salary costs there, says Vance. Another saving comes in the form of under-staffing at the RCMP detachment, which however is only temporary. Mayor Warman added in an email to The Leader there were some savings in the improved cost-sharing agreements with the M.D.

On the capital side of the budget, the two biggest items by far are improvements to water and sewer. $16 million will go into the regional waterline project – most of which comes out of recovery money. Sewage lagoon upgrades are costing an estimated $14.8 million, of which $6.7 million will be spent this year. The provincial contribution to the overall project is $6 million.

Other capital items in the budget are equipment upgrades at the swimming pool and some work at the multi rec centre. Roof repairs at the water treatment plant are expected to cost $138,000.

Wrapping up the discussion at the council meeting, councillor Julie Brandle said it was the toughest of the five budgets she’s worked on now as a councillor. Oddly enough, she also called it “the smoothest.”

Councillor Darin Busk thanked town staff for their hard work on the project and added, “We’re all taxpayers up here too.” 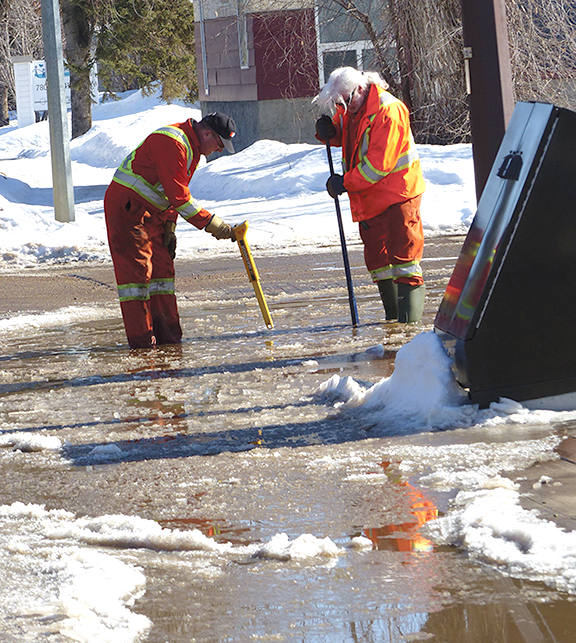 Where is that darn thing?