The Chamber of Commerce made its annual pre-budget presentation to council, with an overview of its activities and plans and a request for more funding. Chamber president Francesca Giroux spoke about the Chamber’s plan to further develop community events and promote and support local business. One way to do that is through a revamped spring trade show, which is being conceived with an ‘outdoor adventure’ theme for next spring, Giroux said.
Advocating with government and providing professional development opportunities are two other Chamber activities mentioned by Giroux.
“We’re being asked to do more,” she said, and to do that, more money is needed. The request from the town for 2018 is $16,500. That’s an increase over 2017, but Giroux did not say how much.
“In order to achieve what we want we’re going to need money,” she said. “We’re not just coming to the town.”
Commenting on the situation, mayor Tyler Warman praised the performance of the new Chamber board this year. In past years, he added, council wasn’t sure it was getting value for its money; hence the reduction in 2017. This year, Warman said, “you blew it out of the water.”
However, he added, “Saying it’s great and getting money are two different things. We haven’t started budget yet.”

CAO Brian Vance reported the latest on the CN crossings; two of them ended up with the rails being higher than they had been before they were replaced. Councillor Julie Brandle brought it up at an earlier meeting, asking if anything could be done to alleviate the big bump on 7th St SE/NE going into/out of the Springwood neighbourhood. Vance said he had since talked to CN, and they have promised to put ‘cold patching’ at that site to improve things.
Brandle was happy to hear that. “It was fine with four feet of snow on it this morning,” she said. “But it’s not going to stay like that.”
In other CN crossing news, Vance said the project to install new lights and crossing arms at the Main St. crossing is “well underway.” 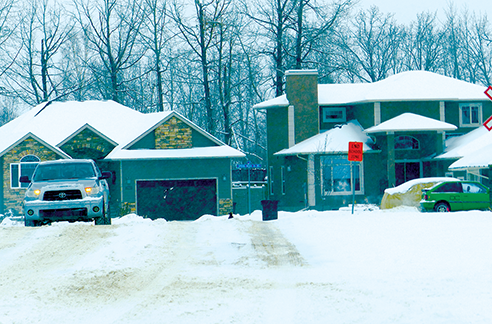 The crossing at 7th St. SE

Vance reported that the two big water system projects are proceeding nicely. Main St. North waterline replacement is winding down for the season, with only a few tie-ins to be completed along Tamarack Rd. The rest of the work will be deferred until spring.
The regional water intake and waterline project is forging ahead. Vance said concrete pouring for the pump house at Wagner was underway. Pipeline work is expected to start in January.

One item in Vance’s report that probably raised an eyebrow or two had to do with the town “enforcing fire lanes at No Frills and Walmart.”
The Leader followed up and asked peace officer Mark Becker for details. He said the stores had approached the town some time ago for help with the problem. It’s not the people who sit in their idling vehicles at the curb while waiting for their passengers to do their shopping; it’s the ones that “are parking, leaving their vehicles running and going in and shopping.”
Apparently it happens quite a lot, and it is completely illegal.
“So people are getting tickets,” Becker says.
If somebody is in the driver’s seat, “we’ll ask them to move,” Becker says. Otherwise, out comes the ticket book.
Is it having much of an effect? Not as far as he can tell, Becker says. 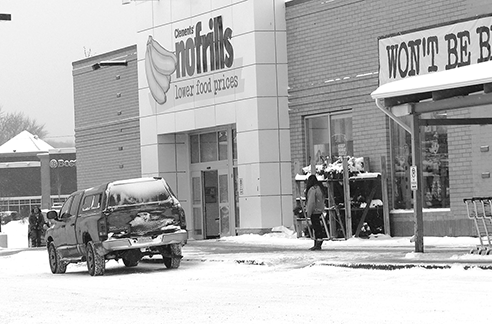 People who park in places like this, leave their vehicles and go shopping may find a ticket under their windshield wiper.

Council approved the first bit of construction on what will be at least an $11.3 million sewage lagoon upgrade project. The upgrade is needed to meet new standards for phosphorous and nitrogen levels in effluent outflow. Even after spending all that money, council heard, it might not do the trick. If tests on the discharge still aren’t up to par, expect another $2.5 million, advised town project manager Doug Baird.
“Doing nothing is not really an option,” he said.
So council approved the contract for the first phase of construction, which is the removal of about 20,000 cubic metres of material from an old cell and hauling it to the regional landfill. The digging and trucking cost is around $312,000; the landfill fees are estimated at $120,000. The contract for the excavation and hauling goes to Nash Enterprises of Slave Lake.
Baird estimated the trucking would amount to 800 loads. The landfill commission has agreed to reduce its normal $30 per tonne fee for such material to $5 per tonne. As noted in an earlier report, a landfill in Athabasca County also wanted the material, for capping purposes.
It’s a big project – probably the biggest in terms of cost that council will see in its term, mayor Warman said. The easiest way to manage it, he added, is like this, “in bite-sized pieces.”
About half the cost ($6 million) will come from a federal grant.
More notes on Page 8

The rubber meets the playground

Council approved a letter endorsing a town application for a grant to help pay for a rubberized surface in one of the town playgrounds. This is via Alberta Recycling’s Municipal Demonstration Grant Program. It offers half the cost of such upgrades, to a maximum of $30,000. Ruth Rolfe, presenting the report, said the estimated total cost of the project is $60,000 – which would amount to excavation and edging of the space in addition to the poured rubber surface.
Two possibilities were offered – Kinsmen Pine Park and Kinettes Park. After some discussion, council passed a motion (by councillor Rebecca King) to approved the letter for the grant for funding for Kinettes Park, which if we’re not mistaken is on 12th St. SE.
“Does the surfacing have to be black?” asked councillor Julie Brandle.
It doesn’t, said Rolfe. Other colours are available, but they cost quite a bit more. 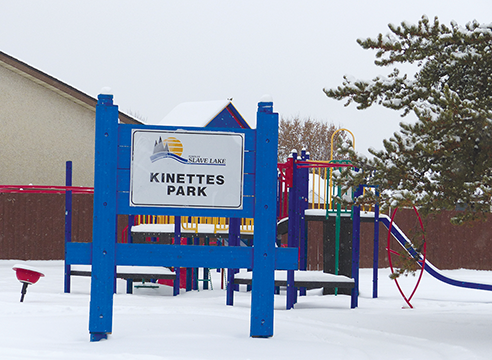 Per direction from council at an earlier meeting, a report on the naming of the community walking trails had been prepared and was presented. The recommendation was to name a portion of the trails after the late mayor Gerry Allarie.
“Not the whole trail?” asked councillor Shawn Gramlich, pretty much echoing the sentiment of all of council.
“I think it’s confusing to break it up,” said mayor Warman.
Accordingly, councillor Brice Ferguson made a motion to name the whole trail system after Allarie, and to “have it vetted through the naming committee.”
That raised the question as to what was the point of having a naming committee look at the matter if council had already made up its mind.
However, that’s what will happen. Council was also informed that the newly-revived naming committee has enough members and is ready to go to work.
Warman wryly commented that the last bit of work done by the committee – coming up with the name for the new cemetery – didn’t quite hit the mark in his opinion.
Also in the motion was the direction for administration to come up with ideas and costs for signs.

Regional Library Board – “We talked over our budget,” said councillor McGregor. “We’re ready to go. We’ll bring it to the M.D. and town.”
“Is there an increase?” asked Warman
A bit over two per cent, McGregor said, thanks to the minimum wage going up next year. She said the budget increase had been four per cent, but was knocked back.
“I told them they might have to cut more,” she said. If so, it’ll be service levels.
In other library news, McGregor reported big turnouts for the library’s ‘Haunted House’ event at Halloween (over 400); the after school club is also thriving, with 198 participants. On the other hand, a Friday morning program for toddlers is being discontinued.
Regional Housing Authority – councillor Brandle said the board has “significant new members,” and the first meeting since the election was partly “housing 101” to get them acquainted with what’s what. Brandle was reappointed as chair.
Asked about recovery trailers in Lynnwood, Brandle said the provincial government has changed its plans on what to do with them. It had intended to give the tenants first option on purchasing them, but “now that’s not going to happen.”
What is going to happen is not entirely clear, but it looks as if the government has other plans for those units.
Municipal Planning Commission – councillor Ferguson said the commission dealt with two items at its first meeting; one was an approval for a location change of a downtown business and the other was for a home-based business.
Landfill Commission – Ferguson reported that the main topic of discussion at the recent meeting was the tippage fee for the truckloads of bio-solids from the town’s sewage lagoon, anticipated to be coming. The commission ended up agreeing on a reduction from the normal $30 per tonne to just $5 per tonne, which Ferguson described as “a win/win.”
Wildfire Legacy Corporation – Warman reported that the work continued preparing for the big fundraising banquet/auction/entertainment on Nov. 18 and that tickets were approaching three quarters sold. The board would be meeting soon with the Elks Club to talk about an amended agreement, he said.
Protective Services Committee – the news from the latest meeting of this group included details on the number of medical professionals at work in Slave Lake. That would include six full-time doctors, reported councillor McGregor, and five nurse practitioners. Recruitment efforts continue on both those fronts, with some decent prospects for 2018.
People not turning up for appointments at the Family Care Clinic continues to be an issue – one harming the efficiency of the operation. In October, McGregor told council, there was a 5.4 per cent ‘no show’ rate. That’s down from previous months, but it amounts to 232 appointments, and “is still a problem.”

Warman, speaking about the upcoming Alberta Urban Municipalities conference, said “we’ve got four minister meetings set up.” He said whereas in the past he’s done most of the talking at these, he expects his fellow councillors to share that load this time around.
These meetings with government ministers are valued as a way for municipalities to bring their major concerns directly to the people with the power. It may or may not bear fruit, but Warman reminded his colleagues of the recent big success of winning the lion’s share of provincial airport funding for the resurfacing project at the Slave Lake Airport.
This year’s AUMA convention is in Calgary, Nov. 22 – 24.
Warman also expressed his pleasure at the news that Habitat For Humanity’s third housing project in Slave Lake is completed and a family is due to move in soon.
“It’s great to hear,” he said. “It won’t be long before they start another one.”
Habitat has 10 lots in Slave Lake on which it plans to build homes for eligible families.
“It’s good to see that program forging ahead,” Warman said.