The educational program on sidewalk clearing has started and produced some good early results. CAO Brian Vance reported “a very high subsequent removal rate,” after information on property owners’ snow-clearing responsibility was hung on doorknobs. Perhaps the threat of a $500 fine was what did the trick.
It should be noted that where the town has piled snow on one side of the street, property owners there are not required to clear their sidewalks. As for the rest, Vance said though compliance has been good where the ‘door-knockers’ were handed out, a few did not respond. The next step would be to issue a ticket.
“Empty lots with snow on the sidewalks remain an issue,” Vance said.

In a related story, Vance reported in a town bylaw enforcement issue that went to trial. A property owner had chosen to challenge an order by the town to properly maintain his property.
“The bylaw was viewed and dissected by a Provincial Court Judge (which doesn’t happen often),” he said in his written report for council, “and our community standards bylaw was (held up) well in trial.”

In need of blankets

The last note in Vance’s report on the business of the bylaw enforcement department had to do with the need for blankets at the town’s animal control facility. “Anyone wishing to donate blankets can drop them off to the Town of Slave Lake office,” he said in his report. Seeking clarification, councillor Joy McGregor asked if that meant at the front desk. That’s right, Vance said.
The plan is to spread the blankets on the cold concrete floor for the animals to lie on.

Boilers and hot water tanks, a problem waiting to happen

CAO Brian Vance’s report had an item in it about problems with boilers and hot water tanks at the rec centre. This prompted a remark from councillor Joy McGregor, who said, “It seems we always have issues with boilers and hot water tanks.”
Vance called it an “accumulation of problems,” and advised council to expect a request to approve spending above the budget on fixing it.
“Those big water heaters are a problem waiting to happen,” he said.

Water meters on the blink

Nearly 1,000 water meters are not working, Vance reported, thanks to battery failures.
“The manufacturer is having this issue everywhere and is having difficulty supplying adequate replacements. We just received 50 and are expecting another 500 in January.” 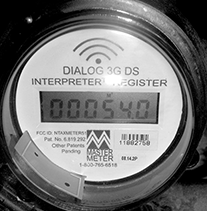 Town water meters: failing to beat the band, due to faulty batteries.

Per the usual practice, council approved an interim budget for the first couple of months of 2018. This allows the town to run things more or less normally, while council and administration wrestle with what will end up being the actual budget for the new year.
The report for council prepared by finance director Roland Schmidt showed that the 2017 budget was for $26,927,608. According to Schmidt’s calculations, just over $3 million would suffice to cover expected costs for January and February.
“So it’s largely status quo?” asked mayor Warman.
“Yes,” said Schmidt.

Following up with CN Rail on bumpy crossings

Those two bumpy CN crossings in town have not been fixed, Vance reported. CN had replaced its rails, resulting in two crossings where the rails were higher than before. Temporary repairs were supposed to alleviate this for the time being.
“We met with CN to discuss this issue and are now following up to see why the temporary repairs were not completed as committed,” Vance said in his written report.

Council rescinded a 1988 bylaw that made provisions for property owners to pay their property taxes by installments; then they approved a new version of the bylaw.
The old bylaw was out of date and needing updating, council heard. It “quotes an outdated Municipal Taxation Act and does not provide for any changes made to property taxes, payments policies or banking methods since 1988.”
One change that improves customer convenience makes it possible to sign up for the installment payment plan at any time. Formerly, it had to be before Jan. 15 of the tax year. On the other hand, payment by cash is no longer an option, but payment by automatic withdrawal now is.
“We do try to make it as easy as possible for people to pay their taxes,” said Vance. “The easier it is for them, the easier it is for us.”

Council formally approved the contract for the regional water line construction. The recommendation to award it to the Weaver Group had been on the books since last July.
The line is the next phase of the project, which has been over five years in the making so far. It was conceived following the 2011 wildfire disaster, when it came to light that the town’s water system was inadequate (and in fact failed just when it was needed the most). The new system is to supply raw water to the town’s treatment plant. According to the report attached to council’s agenda, the system is designed to be big enough to meet future expansion north of the river and to the Mitsue Industrial Park, should the municipal governments of the day deem that necessary.
The project isn’t cheap. The construction of the dual intake and pumphouse at Wagner is running just under $6 million; the contract for the water line at just over $10.1 million.
Most of the money for the project is coming from provincial disaster recovery. But the shortfall is $2.083 million, “to be funded by the Town of Slave Lake by a means to be determined in the future, which may include borrowing.”

Legacy Centre – Warman said meetings have been held with the Elks Club to “to see if we can better align operations with expenditures.” More meetings are planned.
Tourism – this group met recently to work out details of its membership structure. This includes what fees member companies will pay. Warman said the idea of modelling it after what the Chamber of Commerce does would likely happen. This involves higher fees for companies with more employees.
Strategic planning for the tourism group is being scheduled for some time in January.
Inter-municipal – Mayor, reeve and CAOs met to “sort out the last five to 10 per cent,” Warman said, referring to the remaining issues to be resolved in the two major co-funding agreements between the town and the M.D.
“Things are moving along,” he said.
Budget – “We’ve started digging into the budget already,” Warman said. “To see how we’re going to spend 26 million bucks.” Council went directly from the public meeting into a budget meeting.
Minister calls – Warman said he’d received a call from the office of Lori Sigurdson, Alberta’s Minister of Seniors and Housing, requesting a phone conversation.
“A five-minute phone call,” he said. “I’ve no idea what it’s about.”