No decision on enforcement order appeal

Council heard an appeal of an enforcement order from Harry and Suzan Staab. It had to do with what the town calls a failure to install separate sewer services to two properties the couple owns in the Springwood neighbourhood. This despite it being clearly and repeatedly stated by the planning department that such were necessary, according to the report by the planning department.

Staab’s argument – leaving aside several extraneous aspects of it – seemed to revolve around the fact that the sewer hookups were approved by the town (and others) back in 1993 when he built a duplex there (the pipes were in the ground when he purchased the property, he said). That, plus the fact that the single service (i.e. – a six-inch line connecting the two properties to the town’s main line under 7th St. NE) is more than adequate to handle the flow.

A further point asserted by Staab was that when the town approved a development permit for the two residences Staab built (post 2011 wildfire), it did not specify that the separate services were required. This was added after the fact, he said, with no opportunity for appeal.

The town planning department’s position – presented by Laurie Skrynyk – was not that the 6” line servicing the two lots isn’t big enough; it’s that for reasons of liability, the town has required (for at least the past 22 years) separate sewer services to individual properties. This was explained to and understood by Mr. Staab, Skrynyk insisted, and he didn’t comply. Case closed. The town has ordered Staab to rectify the situation by June 29. It estimates the cost of the procedure to be around $25,000.

Staab presented letters from his lawyer, suggesting the town is out of line with its enforcement on the matter.

After hearing from both sides and asking questions, councillors went in camera for further discussion and debate. However, they did not make any decision. That may come this week.

CAO Brian Vance’s regular update for council consisted largely of news from the town’s efforts to deal with the effects of high water and high wind over the previous couple of days.

“The town operations crew worked throughout the night with up to 11 vacuum trucks to keep water and sewer from backing up,” he said in his written report for council. “Lift Station C and Sawridge Lift Station were overwhelmed at times, but the trucks managed to maintain levels.”

This was the sanitary sewer system. Had the trucks not been able to keep up, the result would have been sewer backed up “into countless houses,” Vance said.

There were some tense moments when Sawridge Creek breached the berm near the hospital. But apparently the water never reached the hospital, and in fact found its way into low ground in Schurter Park.
Vance said it helped to be able to do constant online updates of the situation. This included the debunking of various false rumours that were showing up, such as one that suggested town residents were being evacuated.

“It helped to straighten that stuff out,” he said. 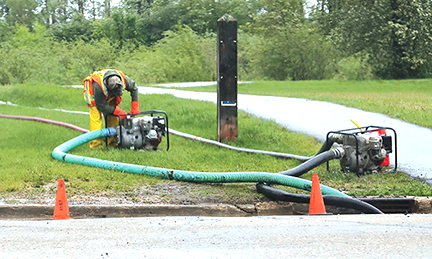 A town emnployee pumping out the overloaded storm sewer on 3rd Ave. NE

Chamber of Commerce – mayor Tyler Warman said news from the most recent Chamber meeting was of a “drastic” effect on the Chamber financially, due to a change in the agreement with the Riverboat Daze midway operator. The ‘rides’ as people call it, was always a decent money-maker for the Chamber, but now won’t be.

Asked why, Warman said it apparently had to do with the site. The midway operator doesn’t like setting up in a field and would prefer a paved site. If they get a paved site, the Chamber’s share of the profits go back up, or something along those lines.

Can’t they find such a site? asked one councillor. They have set up at the MRC in the past, Warman said, but there are problems. For example, they want to put screw anchors for some of their equipment into the asphalt, causing damage.

Meeting on homelessness – Councillor Rebecca King informed her colleagues a meeting on homelessness has been set up for Tuesday, July 10 at the Friendship Centre. Initially to be for the town and Friendship Centre people to discuss the topic, it will likely be expanded to include other interested parties. That had been council’s intention in making a motion on it at an earlier meeting, mayor Warman said.