Home News Town taking over operation of the Legacy Centre

Slave Lake Mayor Tyler Warman has been dropping hints for months that all is not well in the management of the new Legacy Centre in Slave Lake. Without ever getting too explicit, he let on that the Elks Club was struggling to carry out its part of the bargain. Negotiations on a new management model were under way, he said.
Last week we found out what those discussions were about.
“The town will be taking over operation of the Legacy Centre,” said Town of Slave Lake CAO Brian Vance in his written report at council’s Jan. 16 meeting. “We are looking at what is required to integrate it into our regular facility operation.
“There are a lot of moving parts,” Vance added, verbally.
That was how the meeting started. The business part of it ended with the following resolution by council: That the town take over operation of the Legacy Centre “on a cost-neutral basis.”
Council passed a motion to that effect, with councillor Joy McGregor the only opposing vote. She offered no explanation. Nor, on the other hand, did any of the ‘yea’ voters give any reason for supporting the motion.
Warman offered the only comment: “There’s a transition,” he said. “It will take some time.”
The Legacy Centre is owned by something called a ‘Part 9 Corporation.’ It is made up of five parties – the town, the M.D., the Sawridge First Nation, the Elks and the Slave Lake Childcare Society.
The building was constructed on land belonging to the Elks Club, and the deal was they got a new hall/performing arts venue that they would be responsible for managing. They’d also do the bookings for it and benefit from liquor sales at events.
It was experimental territory for the Elks – and indeed all the partners in the enterprise. The daycare people seem pretty happy. Their facility is full and better in every respect than the leaky and cramped one it replaced.
The theatre has been used for events and although not without drawbacks (nobody is in love with the pull-out bleacher seating), it allows for bigger and better shows.
The centre opened in June of 2016 to great fanfare and the future seemed rosy. A year or so in, and it started to appear that the Elks had bitten off more than they could chew. Expenses too high, volunteers too few, work too much – that sort of thing. That’s when the discussions started.
It costs a fair amount to keep the building running, no question. This leads, inevitably, to high rent. The Slave Lake Musical Theatre Association – a big supporter of the idea of Slave Lake getting a proper performance space – has put on one full-fledged play at the facility and lost money on it. SLMTA president Sean McConnell told The Leader recently that the high rent and lack of storage on site for play sets made it very difficult to prepare properly for opening night of ‘100 Lunches.’ It was a success in many ways, but audiences were not large enough. If the group can’t build a large base of ticket-buyers, it won’t be able to afford the Legacy Centre. It would help, of course, if groups putting on events could run their own bar. But that’s not the arrangement. The Elks have the bar.
Another group told The Leader recently their annual event wouldn’t be at the Legacy this year, for that very reason. It costs too much and they can’t run their own bar. Therefore, somebody else gets their business. On the other hand, control of liquor sales is often retained by hall owners. It’s how they make their money.
And yet another story: the catering company that was based at the Legacy abandoned the kitchen and moved elsewhere because, its owner told The Leader, the rent was “too high.”
If costs of running the place are high, rents need to be high to cover them. That is obviously the operating theory of the Legacy board. But if high prices are chasing away custom, there’s a clear dilemma. It won’t be the Elks’ dilemma, but it will be the town’s.
All of this begs the question: How realistic is this ‘cost-neutral’ notion of town council?
As noted, it’s new territory. Nobody has done this before – at least nobody who is involved in the project. But cost-neutrality does sound like wishful thinking. On the evidence so far, the Legacy Centre costs more to operate than rentals can bring in. Somebody is going to have to make up the difference.
That’s McGregor’s concern. She says she was “never in favour of this building,” – meaning everything except the daycare. “I’ve always felt this would fall on taxpayers’ back(s) from Day 1.” 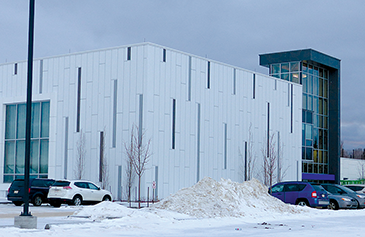