Home Uncategorized Turn back the clock

Slave Lake in the 1940s boasted a cast of intriguing characters

Constance Brissenden
Based on the writing of Larry Loyie

Turn back the clock to Slave Lake in the 1940s, and you find a cast of characters worthy of a book. In fact, Cree author Larry Loyie did put some of the town’s citizens in several of his 10 books. In 1998, Larry wrote his first children’s book, As Long as the Rivers Flow. The story is set on Rabbit Hill overlooking the town of Slave Lake where he was born in 1933. Slave Lake people also appear in The Moon Speaks Cree, A Winter Adventure; When the Spirits Dance, A Cree boy’s search for the meaning of war; and Goodbye Buffalo Bay, about his six years in residential school in Grouard.
Larry often talked to me about the people he remembered in town as a child. I was intrigued, and wrote his comments in a spiral-bound notebook. I came across the notebook this year when I organized his research file. As an award-winning author who wrote four books about residential school, he is recognized for his work. His files will be stored at the University of British Columbia’s new Indian Residential School Research and Dialogue Centre. He described Slave Lake in 1941 in When the Spirits Dance.
“Town was a half hour’s walk away. It was built on one side of the gravel highway; the train track was on the other side. The stores and sidewalks were all made of wood. When it rained, mud puddles appeared everywhere on Main Street. Every building had a scraper by the door to take the mud off shoes and boots,” he wrote.
Larry’s father, Victor Loyie, also known as Vital, moved to Slave Lake as a young man with his mother from Wabamun, Alberta, to escape the flu epidemic that had killed his father. Victor worked as a horse wrangler and packer for hunting trips run by Reinhold Eben-Ebenau, an early settler in the area. Reinhold had moved to Slave Lake in July 1930 from Germany.
“My dad and Victor were good friends,” recalls son Roland Eben-Ebenau. “There was mutual respect.”
Before the Second World War, Reinhold gave Victor a German-made rifle as payment for services. During the war years, Slave Lake police confiscated the German rifle from Victor, promising to return it. He never did get his rifle back. Perhaps someone in Slave Lake still has it somewhere?
Larry Loyie’s mother, Marie Twin, was the daughter of Betsy Thomas of Moberly Lake, BC, and Edward Twin of Kinuso, Alberta. Edward and his brother St. Germaine walked from Kinuso to Moberly Lake, a journey of over 400 kilometres, to find their Saulteau brides. Edward married Betsy, who died at a young age of consumption. St. Germaine married her sister Bella, who in the Cree way became Kokom, the grandmother of the Loyie family. It was Bella Twin who would find international fame after shooting the biggest grizzly bear in North America. 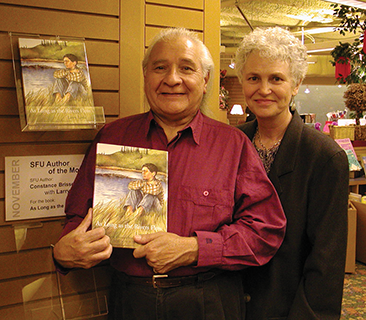 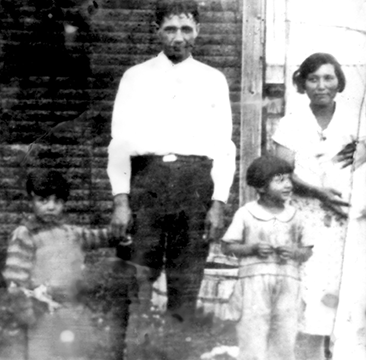 Victor and Marie Loyie and their children, before Larry was born.