It was nip and tuck, down to the wire, etc. etc. but the Vanderwell Axeheads took top spot in the competitive division of the Lesser Slave Forest Education Society’s logger sports on June 3. It’s the third straight time a Vanderwell team has won the event (the last two were in 2005 and 2007).
The competition consisted of eight events – the crosscut, swede and power saw log sawing, log chop, axe throwing, obstacle course, Wajax balloon pop and (drum roll, please), log rolling. The last event, much anticipated, kept the crowd waiting all day. It was worth it, though, watching all those people get dunked, time after time. Apparently the water was quite cold.
The log-rolling got off to a bit of a rough start, thanks to the timber enclosure not being up to the pressure exerted on it by a full tank of water. It started to come apart and had to be drained and then braced.
Teams from Tolko, Vanderwell, West Fraser, Alberta Ag & Forestry (HAC) and the Regional Fire Service took part. The Axeheads finished with 21 points. HAC and the Regional Fire Service were second with 18, Tolko right behind them at 17 and West Fraser came in fourth with 15 points.
“The whole day was exceptional – it turned out better than we imagined. It was a whole lot of work for all of our volunteers but they hung in there and did a truly magnificent job.”
Members of the public were also invited to try out some of the events, which went over pretty well. The axe-throwing was particularly popular.
Adults got to do the double-bitted axe and kids tossed hatchets.
“The highlight for everyone was the kids events,” says Kristoff. “The last time we had a logger sports show we only had a few kids enter – this time we were fully booked with a maximum limit of 20 kids participating in each event in two age classes.”
Kristoff says a special thank you is owing to professional logger sports competitor Kat Spencer, who helped throughout the event, demonstrating and encouraging the competitors. She also spoke at the LSFES banquet that evening, on the history of logger sports, which she is attempting to revive in Alberta. 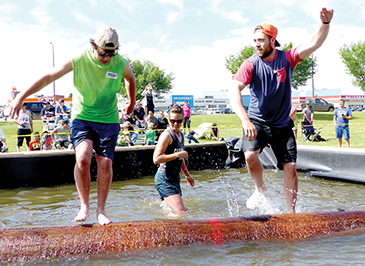 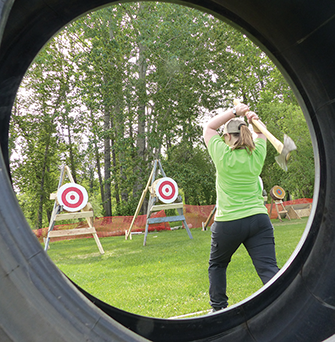 A Tolko team member in the axe throw event – as seen through a tire.