Plans to create a museum and community archive in Wabasca are picking up steam, according to a couple of the people involved in it. Museum society chair Mike Beaver – who is also a former chief of the Bigstone Cree Nation – says work on it started as far back as 2007, but lately “it’s picking up momentum.”
One breakthrough is the acquisition of a building – that being the former Bigstone band office, donated by the band. Beaver says its undergoing renovation. Once the carpenters, electricians and plumbers wrap up their work, the board will turn their attention to how to store and display items they’ve collected.
“There’s people waiting to give quite a few things,” he says.
One of those might be the Royal Alberta Museum (RAM), which has a collection of items from the Wabasca area. When reached by phone last week, Beaver was on his way to Edmonton to meet with RAM officials, along with Travis Gladue, a Bigstone member who lives in the city and who has been talking to the RAM about ‘repatriating’ the artifacts.
“I’m helping the museum society,” he says.
Beaver says “in time” he hopes to have those items returned to Wabasca, so they can be displayed in the new museum. When it might be open he isn’t able to speculate.
“We haven’t really talked about it,” he says.
What they have talked about is that they want it to be more than just a place to look at old things.
“We want stories and pictures,” he says. “We’re thinking of an interpretive centre.”
Besides the support of the band, Beaver says there are encouraging signs coming from the M.D. of Opportunity. He said a recent meeting with some of the M.D. councillors went well.
“They said they want to work with us. It made me so happy to hear that.” 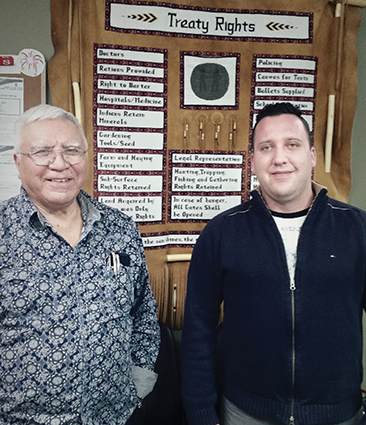 Mike Beaver, left, president of the museum society, and Travis Gladue of the Bigstone Empowerment Society. Gladue and his group are helping to get Bigstone artifacts repatriated. 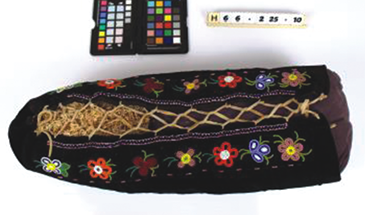 A mossbag for carrying a small child, made by Josephine Auger, is one of the artifacts from Wabasca in the collection of the Royal Alberta Museum. A group in Wabasca hopes one day to have it and others returned to the community to be displayed in a museum there. 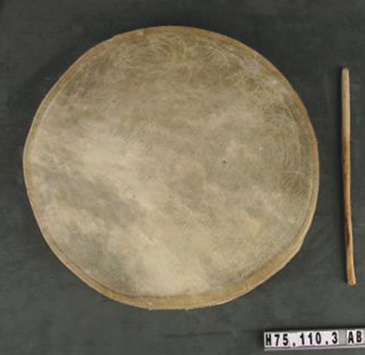 A drum and stick made by Solomon Beaver of Wabasca in the 1970s, one of a number of artifacts from Wabasca at the Royal Alberta Museum in Edmonton.