But Local forest products mills had a good year, expect another one

Here’s something you might not have known about the product produced by Slave Lake Pulp. The great majority goes to China, where it is made into boxes. Into those boxes go products made in Chinese factories, which are then shipped all over the world for sale in stores.
So in the run-up to Christmas, things get very busy for Slave Lake Pulp. After Christmas? Not so much.
“This is the down time of the year for our industry,” says mill manager Tony McWhannel. “We haven’t seen it yet, but we expect to.”
Asked for a forecast for 2018, McWhannel says he expects things to be fairly good, assuming factors stay more or less as they are. Those factors include a pretty lean-running operation that has found ways to cut costs (not without significant investment) over the past few years. Perhaps the biggest of these had to do with setting things up so production could go full bore at the times of day when electricity prices are the lowest.
But at 28 years old, the mill is getting “a bit long in the tooth,” McWhannel says, making the long-term future less certain than the short term.
Specialty products in OSB
For those who witnessed the crash in the OSB panels market back in 2008 or thereabouts, its revival today seems miraculous. Not only is Tolko Industries’ new engineered wood products plant near Slave Lake doing good business, the company has reopened its mothballed High Prairie mill as well. So things must be pretty good.
“2017 went very well,” says Slave Lake mill manager Tyler Harris. “Markets were strong. We expect markets to stay strong.”
One promising factor about the long-term health of the Slave Lake operation is that it is moving strongly into the specialty products area. Still OSB, but products other than the standard sheets that sheath new homes. It’s what it was designed for, but never got a chance to start producing before the ’08 crash. Now a couple of years into the revival, Harris says there’s been a breakthrough in the specialty stuff.
Such as?
Flooring is part of it, he says. Also something called LSL, or ‘laminated strandboard lumber.’ These are being used mainly as headers and beams. The biggest specialty panels, meanwhile (he calls them ‘jumbo panels’) currently being produced are eight feet wide by 24 feet long.
“We supply customers in RV markets,” Harris says. “Floors for RVs.”
There will probably be other specialty products. Harris says it’s an exaggeration to say they’re coming up with new ones every day, but the sky seems to be the limit. If the sales team can find something somebody is willing to try, the mill can probably produce it.
“Our niche is going to be specialty products,” he says.
Traditional lumber
Over at Vanderwell Contractors, things are not looking as dire as you might have thought, given the hullaballoo over the softwood lumber duties imposed by the U.S. late last year. Another little known fact: they don’t add up to much more than Alberta producers were paying anyway under the old agreement.
“There was a surcharge of 20 per cent when we exceeded a threshold in a month,” says general manager Ken Vanderwell. “And we almost always did.”
The surcharge was not just on whatever amount of Alberta lumber exceeded the monthly quota.
“It was retroactive, back to the last stick,” he says.
So at around 22 per cent, under the new regime, things aren’t that much different. The big loser in either scenario, Vanderwell says, is the U.S. lumber customer.
“It’s created an artificially high price of lumber in the U.S. market,” he says.
Trade issues aside, 2017 was a pretty good year for the lumber mill. Prices were at a 15-year high, Vanderwell says, and he’s hopeful 2018 will continue strong. Several factors have gone into the good prices for lumber: hurricanes in the U.S. last year is one; forest fires in B.C. is another. Mountain pine beetle also continues to help the price by making less wood available. Finally, housing starts in the U.S. have strengthened generally, after several years of being below average.
Sweet spot?
Slave Lake’s other forest products mill is the Alberta Plywood veneer plant. It peels thin sheets off spruce logs and ships them to Edmonton where they get turned into plywood, mostly for the Canadian market. That market has been pretty steady for years, and was described by former manager Kevin Arnell as a ‘sweet spot,’ that remained relatively strong when other panelboard sectors were suffering a few years ago.
Things are going well in the market still, says current mill manager Shea Pletzer, and in the mill as well. The main challenge lately has been finding enough log trucks to bring in the wood.
“Our biggest struggle is finding somebody who wants to make a ton of money driving a logging truck,” Pletzer says.
That struggle notwithstanding, he says the recent cold weather really helps, and he expects the yard to be full come spring.
Much of last year was a red hot one in the plywood market. Pletzer says prices were at record highs, before falling off steeply around October. Now they’re back up – not as high as they were, but still at an encouraging level.
Employment at the mill is fairly steady – not much turnover. But there is opportunity for people interested in starting as labourers and working their way into a skilled trade, Pletzer says.
No big upgrades to the operation are planned this year. Minor ones aimed at improving wood recovery are in the works though. The leftover bit of the log after peeling generally ends up as chips bound for Alberta Newsprint in Whitecourt, or as landscape ties.
“Every once in a while you’ll see a truck going to Edmonton with what looks like a load of tubes,” Pletzer says. Those are the leftovers of the veneer peeling process. 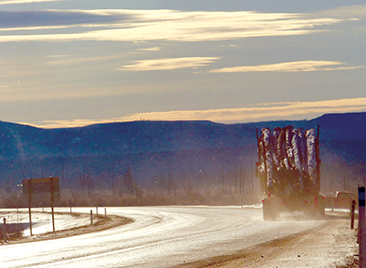 The log haul is just getting into stride. The next two months should be very busy.