Slave Lake’s Bantam team was in Hinton on Saturday and skated to a 7 – 2 win over the host team.
The Thunder carried the play for most of the game, out-shooting Hinton 47 – 13, but oddly enough trailed 2 – 1 after one period. They got that straightened out in the second, scoring five straight to take a 6 – 1 lead.
Ethan Baril led the way for Slave Lake with two goals; Kyle Campbell had a goal and three assists and Jacob Hartman had one goal and two assists. Other goalscorers for Slave Lake were Nathan Hartman, Kyler Deleavey and Brennan Jack. Jackson Morissette had a relatively quiet game in net for the Thunder, stopping 11 shots for the win.
The results from Sunday’s game between the same two teams had not been posted by press time.
The Slave Lake Midget Thunder played in a tournament in Westlock on the weekend. Coach Richard Chemago says it didn’t go so well, but supplied no details. The Midgets get back into league play this Saturday with a game in Athabasca.
At least one Slave Lake Pee Wee team was also involved in an out-of-town tournament on the weekend.
The Atom 1 Thunder had a pair of home games, though, winning one and losing one. On Saturday they defeated Athabasca 7 – 3 and on Sunday they lost 8 – 3 to Whitecourt.
In Saturday’s game, the Thunder led 2 – 0 after the first period on goals by Jonas Lillo and Jacob Derksen. Adrian Mercer, Derksen, Jace Broadhead and Rayce Dierker scored for the Thunder in the second. In the third, Derksen scored his third and fourth goals of the game. Jerzie Green got the win in net for Slave Lake.
In Sunday’s game, the Slave Lake goalscorers were Lillo, Derksen and Liam Dierker.
Slave Lake’s Bantam/Midget Female Thunder played in Fort St. John and Dawson Creek on the weekend. The score in the first game was not available by press time; in the second, Dawson Creek won 6 – 1. Kennedy Hartman got the only Slave Lake goal.
The girls’ next home games aren’t until the first weekend in February. 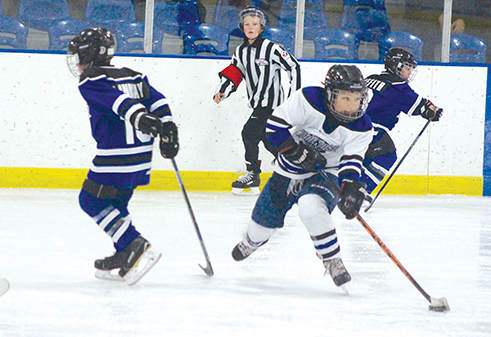