‘What kind of a brewer doesn’t have beer?’ That’s a question (rhetorical) that has been heard around town from grumpy customers of Slave Lake’s Dog Island Brewing Co. The answer is a small-capacity producer, whose product sells out the day it becomes available. Or the day after.
But that’s about to change!
“We’ve ordered our big brewery,” says co-owner Chad Paulson.
“It’ll be here Monday,” says his partner Ben Fiddler. (And in fact has now arrived – or at least partly arrived.)
The new system will have 10 times the capacity of the current one – about 1,700 litres per batch. So instead of being open only every other Friday or so, Dog Island Brewing will be open every week – as well as supplying retail customers, special events and even shipping some of its product to a liquor supply outfit in Edmonton.
“We plan on canning too,” says Paulson.
The portion of the new system that arrived last week – called the ‘brew house,’ will not take that long to set up. Other components, including a boiler, will trickle in over the next couple of months. The two owners plan on doing all the installation. They figure it’ll take at least two months to get it going.
The plan is to keep the smaller brewing system.
“It’ll be our test brewery,” says Paulson.
Last week when The Leader visited, the air was full of the aroma of a new batch on the brew. The cooler was stocked with kegs filled with product ordered for the Kinette’s beer bash and another special event. The batch in process should be available sometime pretty soon – check out DIB’s Facebook page for the announcement.
These are pretty good times for the Alberta craft brewing business. It has a lot of catching up to do, but apparently the market is there. Recent moves by the provincial government in favour of Alberta producers have helped, Paulson says. This was criticized as protectionism in a recent opinion column in this newspaper – and supported on the Letters page last week. Paulson says it simply levels the playing field. It has long been easier for brewers in other provinces to enter the Alberta market than vice versa, he says. For example, “For us to go to Saskatchewan – we’re paying a dollar a litre.” 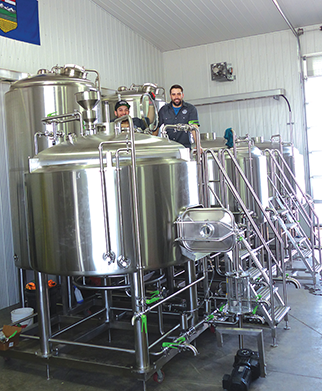 Another view of the Dog Island Brewing brew house, in the shop last week and partly asssembled.