Extension may be granted
An application for an extension on a subdivision agreement in Wagner turned into a lengthy discussion on drainage and the difficulties it can cause. In this case the M.D.’s requirements on it may be slowing the process down. If that’s the case, suggested councillor Darren Fulmore, should we waive the extension fee?
Councillor Brian Rosche said he’d support that – but only if the M.D. is causing the delays, not if the applicant’s non-compliance is the issue.
Councillor Mike Skrynyk made a motion directing admin to review the case.
“If we have drug this out,” he said, “the fee should be waived.”
The motion passed.

Auditor reappointed
Council eventually came around to accepting admin’s recommendation to re-appoint Hawkings Epp Dumont to another three-year term as the M.D.’s external auditor; also as the auditor for the regional landfill commission. Making the pitch, M.D. director of finance Jason Warawa cited the firm’s extensive experience with rural municipalities, the good work it has done for the M.D. and the advantage of continuity through a period when council will likely change.
He added, in answer to a question, that what the M.D. gets as a result of HEP’s municipal experience is “significant. It’s a noticeable difference.”
Nobody disagreed with that reasoning, but leading the campaign to give local accounting firms a chance to bid on it was councillor Rosche.
“I think we should invite them to submit a bid,” he said, and made a motion to that effect. It was defeated.
More successful was councillor Robert Esau’s motion to accept admin’s recommendation. With a couple of friendly amendments, it passed by a 6 – 1 vote.

Meeting with Swan Hills waste plant operator
Council discussed a proposal by the operator of the Swan Hills hazardous waste treatment plant to set up a meeting between the two parties to discuss environmental monitoring. This followed a letter sent by the M.D. to SUEZ North America, stating council’s support for Keepers of the Athabasca in its campaign to get SUEZ to increase its core sediment sampling program.
‘Come to see us at the plant!’ was the gist of the SUEZ letter to council.
Council passed a motion to have admin set up something suitable to both parties.

Who owns the beach?
There are conflicting ideas about who owns a strip of lakeshore in Canyon Creek west of the Jean-Luc Deba Memorial Park. Generally speaking, beaches are understood to be public land, open to anybody. However, there are property owners there who “believe that their title extends to the water,” says a written report for council on the matter. “This belief has resulted in conflict between beach users and the property owners.”
The M.D. has done some research.
“A review of each title did not reveal ownership to the water,” the report continues. “the boundary line location is determined in relation to the lake under the provisions of Section 17 of the Alberta Surveys Act. This means that the boundary is the ‘bank of the body of water.’ As this location was determined in 1914 for Lesser Slave Lake, this boundary may have changed.”
The report goes on to say if users respect each other there is no problem. However, if problems continue, “resolution is necessary. At (the) time of writing, an estimate to do the survey work has been requested.”

Siding re-hab to the low bidder
A contractor out of Peace River was approved for the job of re-habbing the finish on both the Widewater Complex and the Visitor Information Centre by Slave Lake. Lavergne Construction had by far the lowest bid, coming in at $37,439 for both projects.

Contracts awarded for Marten Beach, Smith, Slave Lake
Council approved the admin recommendation on three contracts. Getting the Marten Beach wooden walkway re-hab job is Strike Contracting, for $63,975. That’s about $5,000 under budget.
The trail paving/building jobs north of Slave Lake and in Smith go to E Construction, for $224,837. The M.D. had budgeted $231,000 for it.
Replacing the roof on the main M.D. administration building goes to Belvedere Roofing for the sum of $185,995 – well under the $421,000 budget. Competition was stiffest on this project, with six qualified bids received. Two bids were received on the Marten Beach job and only one on the trail work.
While he had director of transportation Bill Klassen in the hot seat, councillor Fulmore took the opportunity to ask him about industry compliance (or non-compliance) with M.D. efforts to save the Old Smith Highway from getting pulverized. Apparently there have been some issues. There has been some progress, Klassen said.
“We had a very serious talk with them (a certain unnamed industrial user) yesterday. They were very contrite. They’ll be working a lot closer with us in the future.”
Good, said councillor Garry Horton. Because the road is terrible in spots.

Smith to get new lift station and force main
The sewage lift station and main line are old and run down and in need of replacement. There are all sorts of problems with both, according to a report in council’s agenda package. Recommended was to award the replacement job to In Line Contracting Partnership, for $1.72 million. It includes a new concrete lift station with a building above to house electrical equipment, including a backup generator. The realignment of the force main “will eliminate the railway crossings and finally put an end to the odour complaints from the businesses near the ‘drop manhole’ on Main St.”

Connection issues in Southshore
It’s time to close the circle on Southshore sewer system connections, was more or less the message in a lengthy report before council. For a variety of reasons, at least 16 residences did not tie in at the time such tie-ins were being financed by the M.D. More likely the number is around 20. According to M.D. bylaw, they have to, and they have to pay for it themselves. Is it time to bring the hammer down and force a conclusion to this saga?
The bylaw stands, notwithstanding all kinds of beefs about the system and the decisions made on particular types of equipment, etc. There’s even a list of penalties for non-compliance, just waiting to be enforced.
Council wasn’t being asked if the M.D. should go ahead and enforce compliance. It was being asked if the new deadline should be Oct. 31 of this year, or July 31 of next year. Councillor Mike Skrynyk had another idea:
“I’m for giving them more time to figure it out,” he said, referring to financing.
Skrynyk made a motion to that effect, which was carried.

Board reports
Regional library – Councillor Brad Pearson reported that a new library manager has been hired. Otherwise, “business as usual,” he said. “It’s a busy place in the summer.”
Pembina Zone (of the AAMD&C) – Reporting on the July meeting on this regional group of rural municipalities, councillor Fulmore said (among other things) that the members are looking for “clearer communication from the government on Bill 6.”
Another item at the meeting was Parkland County’s proposal that user fees collected on off-highway vehicles be directed into trail maintenance. Reporting on this, councillor Pearson said trail maintenance could become “very costly.”
Softwood lumber round table – Councillor Rosche had attended a meeting with lumber producers and others with a Saskatchewan MP involved in negotiations with the U.S. on lumber tariffs. One thing the Canadian group is pushing for is a ‘Hot Market Provision,’ in the agreement, which would compel the U.S. to look first to Canadian suppliers when domestic output can’t meet market demand. Another thing brought up at the meeting was that tariff money returned to Canada (once it inevitably wins the dispute) not disappear into general government revenue, Rosche reported.

CAB meets, considers, decides
Council, reconvened as the Community Assistance Board, went in camera to discuss the merits of three applications for M.D. grants via the CAB. One was from the Flatbush Silver Threads, one from SHARA and the third (just in under the wire) from a Smith group called True Grit Drill Team. Their requests were for $2,331, $10,000 and $1,311, respectively.
The Flatbush request was for money to replace the current door with one that will be more accessible – for people in wheelchairs, for example, council heard. SHARA’s request was for help funding aspects of the annual fall fair and rodeo. The True Grit group described themselves (in their written application) as “a team for grand entries at rodeos and other equine events.” For safety’s sake, they wear helmets, and wish to purchase 14 of them at the rate of $119 per unit.
The board heard that the three requests added up to more than what is left in the CAB account for 2017. It’s decision was to grant the requested amounts to the Flatbush and True Grit groups, and $5,000 to SHARA. 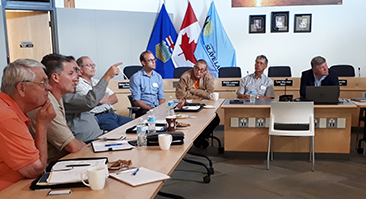 M.D. councillors at a recent discussion on softwood lumber tariffs.