Slave Lake’s Midget and Senior Women’s hockey teams hosted teams from out of town on the weekend, winning both games.
For the Midget Thunder, it was their third meeting of the season with Whitecourt and the third win. This one was quite unlike the other two, being relatively low-scoring. It ended 4 – 2 for the home team.
The team’s leading scorer, Dominic Wapahoo, bounced back from a goalless game in Athabasca a week ago to lead the team with two. Linemate Keenan Der assisted on both and scored one of his own. Cody Fillion scored unassisted on the powerplay. Also in on the scoring were Matthew Cardinal and Anthony Beaver.
In net Chase Nehring saw only 19 shots. His teammates fired 39 at Whitecourt goalie Nicolas Melnychuk.
The Thunder are on the road this weekend, in Hinton and Jasper. They sit one point behind Jasper for second place in the league.
The Kodiaks hosted the Grovedale Vipers on Saturday, in Peace Country Female Hockey League action. They took a 1 – 0 first-period lead on a goal by Michelle Holmes, then found themselves down 2 – 1 towards the end of the second. But two quick ones to end the period put them ahead for good. These were scored by Lyndsay Baird and Paige Foster. Two more in the third, by Brianne Welygan and Melanie Herbert, put the icing on the cake. Megan Melnyczuk got the win in net for Slave Lake.
The Kodiaks host the Taylor Falcons on Feb. 10.
In other Slave Lake hockey news, the Bantam team tied Wabasca 2 – 2 on Saturday. No details were available by press time.
The Pee Wee 1 Thunder lost 6 – 1 to Athabasca on Sunday. Tanner Churchill scored Slave Lake’s only goal.
The Pee Wee 2 Thunder lost 12 – 1 to Fox Creek on Sunday in Fox Creek. Addyson White got the only Slave Lake goal.
It’s a bit of a mystery when this game actually took place, but according to the Northern Alberta Interlock website, the Atom 1 Thunder scored a 9 – 5 victory over the CR Knights, with the game taking place on a date in February. Jonas Lillo and Damian Hill both scored hat tricks for Slave Lake. Jacob Derksen scored twice and Koltin Davis got the last one, at 5:15 of the third period. 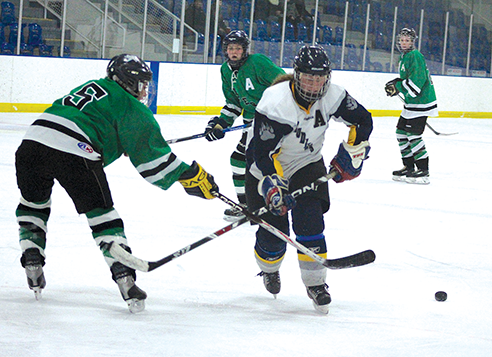 The Slave Lake Kodiaks going at it with the Grovedale Vipers on Saturday. The Kodiaks won 5 – 2.