For a third time in one meeting last week, Slave Lake town council was asked to go against town policy to accommodate a commercial project. In this case it was the wish of an industrial property owner to open a building up to uses not normally allowed in industrial zones.
The property is the former Husky/Unocal office building on Caribou Trail. Located in the BI – Business Industrial District – it has always been an office building, but also only for industrial companies.
Council was faced with the same dilemma as on a couple of other items on its July 4 agenda: allowing more general uses to creep into an industrial area works directly against the downtown revitalization program. Not to mention the usual concerns about setting precedents.
On the other hand: an empty property would get used and local business be accommodated.
Judy Olsen, representing the property owner, told council that allowing general office use would not represent much of a change for the property, since it had always contained offices. She said it was unlikely it would be occupied any time soon by another large industrial tenant.
Town planning and development director Laurie Skrynyk, advising council on the matter, said since the building has only been vacant for a couple of months, it’s far too early to make any such judgment. She advised against the zoning change for the above-noted reasons.
“I’d hate to be too hasty to draw office use out of the downtown core.”
On the other side of the equation is the downtown client who has outgrown her current space and wants to occupy half the former Husky building. Bobby Halliday of accounting firm Bobby & Associates told council she hopes to fill the other half with new businesses.
Council passed the bylaw change by a 4 – 2 vote, with councillors Brice Ferguson and Phil Lokken opposed. 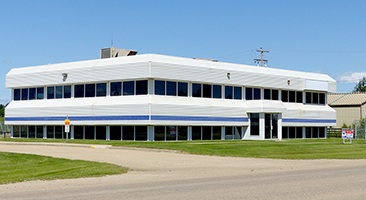